It took 6 months this year, but finally I’ve got a bunch of TV premieres I’m really excited about!  Here’s what I’m looking forward to this month. 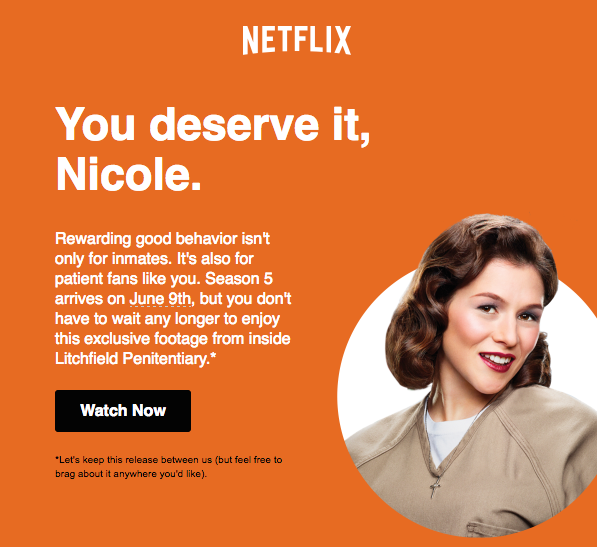 Who else got this little surprise from Dr. Morello?!  image via Netflix

Orange is the New Black (Netflix)

Every summer I binge this newest season.  I’m really sad that we won’t have Samira Wiley this season, but the cliffhanger we ended on last year!!  I actually remember where we left off this time.  From what I’ve read so far, the entire season takes place over 3 days as the prison riot unfolds.  I’m not sure how I feel about this, but I do love OITNB and I’m excited to see where they go with this!  We don’t have to wait long!  This will be available for binging June 9th.

I’ve been waiting for what feel like forever for the final season of Orphan Black.  I started watching this show kind of randomly after a friend made an off-handed recommendation praising Tatiana Maslany.  I have been a loyal fan throughout and I’m dying to see how everything ends!  I actually don’t want it to end, but I’ll be glad to have it back in my life on June 10th!

90 Day Fiancé: Happily Ever After? (TLC)

Wow am I glad I chose to go with PS Vue to keep this channel!  I just love 90 Day Fiancé, but if Happy Ever After? is all I can get, I’ll take it!  Most of my favorites from this show seem to be happily married, and this spinoff deals with the drama.  Of the returning group, I’m particularly excited to see Jorge & Anfisa again.  I’m not a fan of this Danielle and Mohammed drama, though.  Still, I’ll be watching and waiting for this to start on June 25th!

Seriously, all I watch is guilty-pleasure TLC.  I kind of got sucked into this 19 Kids and Counting spinoff last season because Jinger’s relationship was just so engrossing!  She just seemed so daring by comparison to her sisters and it was interesting to watch.  I guess it’s inherently interesting that she’s the daring one.  Now with 19-year-old Joy’s wedding kicking off the season… I’ll be back for more on June 12th.

I’ve recently cut ties with my cable provider.  We switched to a cheaper, faster internet provider and are exploring the world of à la carte TV!  It’s forced me to really take inventory of what channels I watch.  Here’s my list:

It’s at the forefront of my mind that Orphan Black’s final season is coming!  I know I can’t live without seeing this show.  Also, is Broadchurch’s new season going to come to America?  I need that too.  Thankfully, BBC America was offered by both Sling Orange ($20/month) and Playstation Vue ($30/month), our two top options.

Watching Top Chef live is of utmost importance to me.  There’s not a show out there that I like recapping more than Top Chef!  I feel like it’s imperative that I have access to this show and this channel… for important reality TV reasons…  We’d have had to bump up to Sling Blue ($5 more per month) to get Bravo, but it’s included in Playstation Vue!

We are the Crystal Gems!  Steven Universe is my favorite thing currently on TV.  I bought seasons on Amazon just to stay current.  It’s no surprise that we started our Playstation Vue 7-day free trial the day the new episode premiered.  Cartoon Network is also available on Sling Orange.

This one I had to sacrifice.  I may have a Catfish addiction and I might enjoy a guilty pleasure or two on this channel (ahem Teen Mom OG), but MTV was not available on Playstation Vue.  We could add MTV for an additional $5 to any Sling package, but…

Ugh, I can’t help it.  I watch so much TLC it’s pathetic.  I love Say Yes to the Dress which is thankfully always on.  I guess this whole channel is my guilty pleasure.  At the end of the day, I couldn’t live without this channel and it was only available on Playstation Vue, not in any Sling package.

So we’re testing out Playstation Vue!  It’s more expensive than the Sling options, but I wasn’t willing to compromise on TLC.  The best part is, we can cancel at any time if we decide to test something else out!  I guess the actual best part is that there’s a Roku app– we can stream it on both the PS4 in the living room and the Roku in the bedroom, so for the first time ever, we have cable in both rooms!

Who else has made the switch to à la carte TV?

Alert: TLC shows are expiring from Netflix next week.  This is bad news for me, because I watched Toddlers and Tiaras in its entirety no less than 3 times over the summer.  I’ve gotten to be so fond of this train-wreck of a show that I’m not sure how I’m going to cope with not being able to watch these awesome and awkward moments whenever I want!  Here are the moments I’ll miss the most:

It’s Universal Royalty!  (Yes, that was in Annette Hill’s voice.)  The mother of these twins is one of the worst examples of behavior this show has to offer.  Let’s not even start on the fact that she’s spelt her children’s names in ways promising to haunt them throughout life.  She blatantly favors BreAnne, who she says is the prettiest of her five children and looks just like herself.  She constantly puts AshLynn down, and makes her wear a ripped dress while BreAnne gets a brand new one.  This is one of, if not the MOST uncomfortable you can be watching this show.

This is the first of two appearances by Isabella Gielniak, the best example of the positive aspects of pageantry.  Isabella is a creative, energetic little girl.  She’s not the polished pageant “professional” that this show often features.  She’s genuine!  Isabella makes up an entire western wear routine in this episode and ends up winning first place for the category.  You can’t help but smile watching this little girl have so much fun performing. 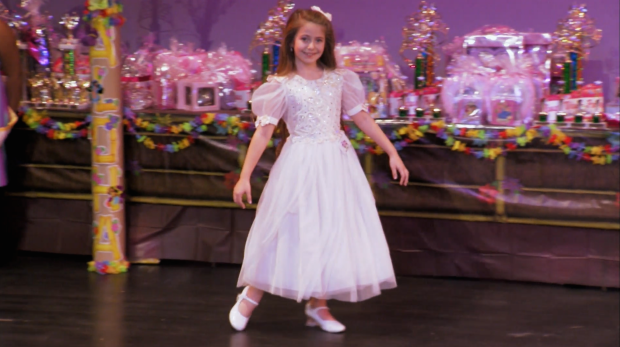 I feel so bad for Liana in this episode, a girl with 42″ hair and the wrong pageant clothes.  Instead of a cupcake dress, she wears something akin to a first communion dress.  Her mother is oblivious to the fact that Liana’s “good quality hair” is not a desirable characteristic.  She’s apparently sent her pictures to “top modeling agencies” in New York and just can’t figure out what they’re looking for. How about cut her hair?! She also forgets her daughter’s make-up and hairbrush. While other pageant moms yells and cheer from the audience, Liana performs while her mother “watches” backstage on a broken tv and her other supporters simply clap politely.  I question why her mother is putting her through this horrifying experience.

In another case of a mother favoring one child over another, this mom throws her support behind her son, Braxton and has no confidence in her daughter, Alaska.  She regularly bleaches her children’s teeth, which doesn’t seem healthy.  She forces fair Alaska to dye her eyelashes, a service I didn’t even know was offered, especially for children!  When pageant day arrives, Braxton is a dud on stage and Alaska takes home a big title, shocking her mother.  Alaska cries tears of joy receiving her crown– she deserves it for putting up with that mom!

Alessandra’s mother does not want her to go glitz… in a glitz pageant.  I don’t condone this pageant lifestyle, but if you want to do a glitz pageant you need to dress the part.  It’s like going to your soccer game in bare feet when everyone else on the field has cleats on.  Poor Alessandra is beautiful and has great routines, but her mini-prom dress’s hoop skirt does not work in her favor.  Her mom realizes that they didn’t step their game up enough.  Girls should feel good about their natural beauty, but being a natural girl in a glitz pageant cannot be good for self esteem. 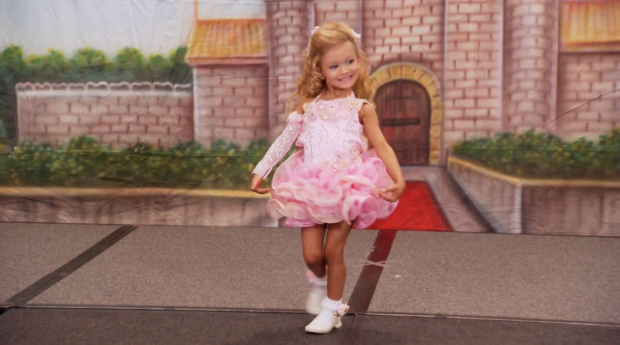 Carley is a worse situation.  Her mother literally lives vicariously through her daughter, saying that she feels like it’s her up there on that stage and that she and Carley are living one life.  Cute Carley doesn’t seem either into or opposed to pageants, but she’s created an alter-ego, Darla, for pageant days.  Her mother encourages Darla’s appearances over Carley’s, which sounds super healthy.  The most awkward moment is when Carley is in the hair dresser’s chair getting her blonde hair retouched.  She says that she doesn’t want highlights, she wants her hair her normal color: brown. I hope there’s a lot of editing going on, ‘cause this is sad. 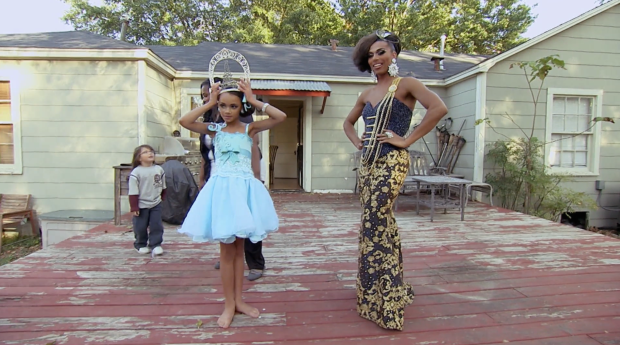 Okay, Hailey is pretty awesome too.  She’s a beautiful and articulate girl and she’s a great performer.  She learned from the best– her godfather, Uncle DJ, better known as Shangela from Ru Paul’s Drag Race!  I’m a big RPDR fan and I love watching Uncle DJ interact with his goddaughter who says that drag queens are cool.  Pageantry and drag are really quite similar, so it’s a perfect role model for her to have.

Of course, I can think of moments more horrifying than the ones I’ve listed here.  What are your favorite horrifying Toddlers & Tiaras moments?

this is actually just my favorite thing. @mattchinese #ourlittlelyon #6weeksold
✨
and I’ll say I love you everyday ‘cause it’s true baby, I do 🤍
my view this morning 🤍 I have so many feelings about how much Luca has already grown, so through all my new mom anxiety, I’m stopping to appreciate these moments with #ourlittlelyon.
Follow nikkisee on WordPress.com