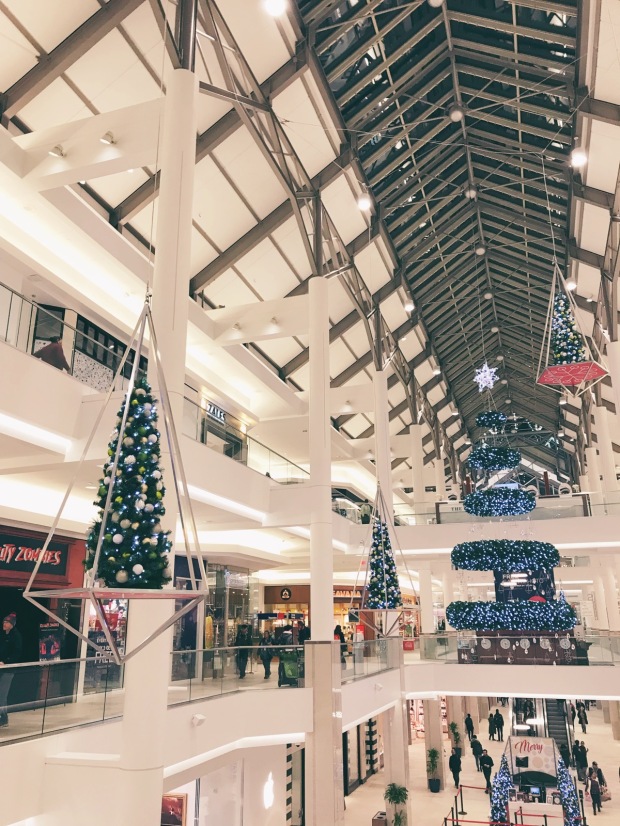 It’s that time of year again– when everyone spends as much time at the mall as I do!  Whether it’s running to Macy’s for the perfect holiday party shoes, or Sephora for the latest eyeshadow palette to compliment my holiday look, or popping in Newbury Comics for that a fun Secret Santa gift, Cambridgeside Galleria is my go-to for shopping!

Cambridgeside Galleria recently underwent a make-over and it looks so new & clean!  The Christmas decor is all new too and I am absolutely mesmerized by these adorable hanging trees in geometric crystal shapes.  Below, Santa waits for you to tell him what you want for Christmas.  Photos with Santa are free, so this is a great place to bring your family (or girlfriends) for a little holiday fun!

Of course, there’s plenty of fun for bloggers as well with the annual Glamour Swap– I never miss it!  This year, I pulled a Celestial-print bag from Ann Taylor that couldn’t be more my aesthetic! 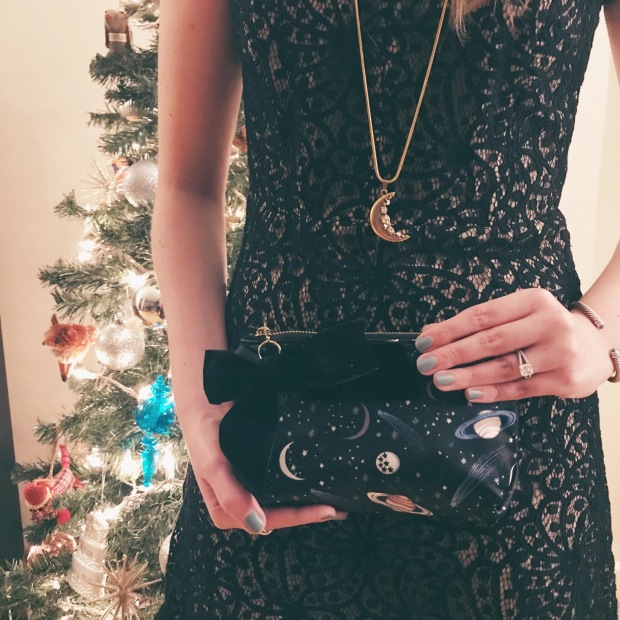 It’s a busy time for us all, so if you’re anything like me, Christmas is sneaking right up on you!  With only one week til Christmas, I suggest you make your way over to Cambridgeside to finish your holiday shopping!

Thank you to Cambridgeside Galleria for inviting me to celebrate the holidays with you!

This title is not only relevant to the episode, but also my main interests in life… on to MasterChef Junior!

The Mystery Box comes with one big mystery box containing the judges in space suits.  Astronaut Tracy Dyson guests and impresses the heck out of both the children and me.  Since, as Tracy says, real astronauts know that the moon is made of cheese, the kids pull open their Mystery Boxes to see a bunch of different cheeses.  Their task is to make an out of this world cheese dish.  (Thank you, MCJ; so much better than marshmallows!)

Addison, Kaitlyn, and JJ have the top dishes.

Kaitlyn wins!  Before her advantages are announced, the judges take it back to earth for the elimination test– they wheel out a bunch of fish.  To tie to moon to the sea, Graham shows the kids how to filet a fish using the GIANT moon fish.

Kaitlyn doesn’t have to cook and also gets to pick a peer to go through to the next round with her.  She chooses Addison.  Kaitlyn also gets to act as fish monger, tossing the chosen fishes to the kids about to cook.

Avery is so spunky.  Her decision making process for this dish seemed to be “my daddy likes it,” and that was just too cute.  Jaecelyn didn’t taste her fish because she doesn’t like it.  Derek is praised for having the best palate in the MCJ kitchen.  Vivian’s sauce doesn’t go with fish.  Kya is the cutest thing and my current favorite.  Kyndall’s veggies are uncooked.  Nate impresses with Asian flavors despite the fact that he’s “not really Asian.”  Too cute.  Ian’s dish goes well despite not needing the potatoes, but MAN this kid makes me nervous in the kitchen.  I’m not sure about his skills.

Nate is the winner!

Jaeclyn, Vivian, and Kyndall are called out for bottom dishes.  Jaeclyn is sent back to cook another day.  Vivian and Kyndall go home.

We’ve still got 18 kids in the kitchen and some still have a way to go to distinguish themselves.  Anyone sticking out in the pack to you?  I’m loving Kya and Sam!

Act 10 – Moon, was a visually lovely episode that did a lot to advance the storyline!  With the inner senshi assembled and mysteries starting to unfurl, Sailor Moon Crystal is finally establishing itself as a distinct piece of the Sailor Moon collective.  I’m in.  I was in before, but I think I’m taking it a lot more seriously now.  Let’s talk about Act 10. 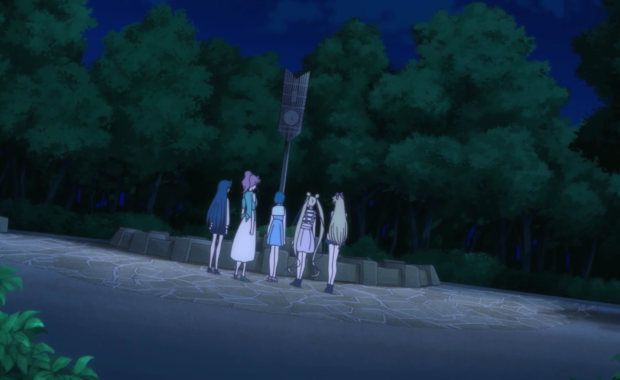 Okay, remember what I was complaining about last episode?  I guess someone was listening to me, because we finally got to see the girls in logical street clothes.  This is a classic Usagi outfit too.  I appreciated this.

Venus is still acting like a know-it-all if you ask me, but that’ll fade now that the rest of the senshi have past life memories. 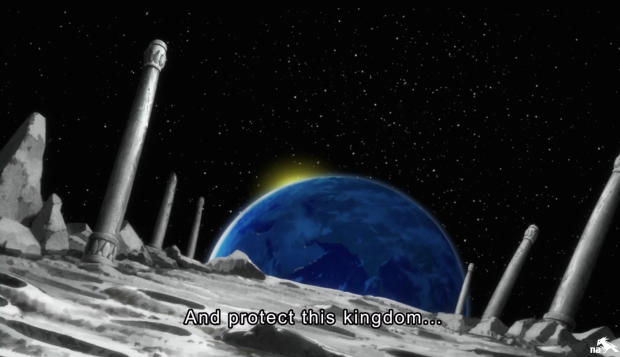 A trip to the moon poses many logistical questions that were not lost on resident brain, Ami-chan.  You’ve got to love how they at least addressed that this is semi-scientific, but whatever they went there by magic.  I was pleased with holographic Queen Serenity’s explanation of their past lives taking place before the Earth cycle started over.  What begs questioning is:

The most interesting reveal to me in this episode was the Four Kings of Heaven.  The four generals that serve Queen Beryl and terrorize the Sailor Senshi are brainwashed versions of the four guardians of Prince Endymion.  Oh, and also, in past lives these four were in love with the four inner senshi.  (Does this make it canon, guys?!)

I could talk about this all day.  I’m so interested in these pairings and if anymore is to come of them in Sailor Moon Crystal.

As for attacks, Sailor Moon’s Moon Healing Escalation came from SPACE in this episode, which was pretty neat.  This is also the first time we’ve seen a Sailor Planet Attack and it was awesome.

Actual important things that come from this episode include the Legendary Silver Crystal, now a handy dandy necklace thanks to Usagi’s dad, is just that at the moment.  It’s power resides in Mamoru.  Speaking of Mamoru, he’s returning to Earth a brainwashed Beryl supported.  This is going to be complicated.

I don’t think I can wait until December for a new episode!

What did you guys think of Act 10? 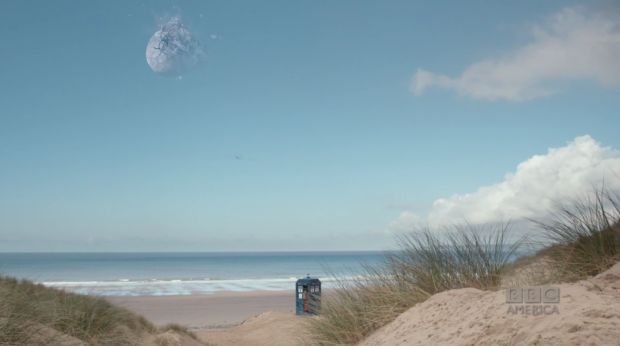 You need look no further than yesterday’s post to know that I find the moon romantic and beautiful.  Space is full of beauty and mystery, and perhaps that’s why both Sailor Moon and Doctor Who appeal to me.  This weekend’s episode of Doctor Who, Kill the Moon, posed the moon as a gigantic egg in the sky; from it hatched a unique winged creature that ignited humankind’s desire to explore space.  I loved the concept for this episode.  Here are a few of my favorite things from this episode:

“In fact, I’m not entirely sure if I won’t keep on regenerating forever.”

The Doctor says while illustrating the futility of shooting him.  This line piqued my interest, as I think it’s something that many Whovians wonder about.  Are there a finite number of regenerations?  We’re not sure.  It seems the Doctor’s not quite sure himself.  It’s nice to leave this open ended for show purposes, huh?

Maria on the moon

Maria are large, basaltic plains that are the “seas” of the moon.  I learned this when I googled a bunch of things the Doctor said.  The Doctor mentions the Sea of Tranquility, Sea of Nectar, and the Sea of Crises, which are all real things!  I feel like I learned something thanks to this episode… which, is the actual original purpose of Doctor Who.  Look at that!  Wiki the list of Maria on the moon yourself– it’s super interesting!

Watching Doctor Who can be a little cultural lesson.  I love British accents and I love regional differences in vernacular.  One thing that caught me off guard was torch v. flashlight.  I just wasn’t expecting this one.  Something I found funny, that I’m wondering whether it’s a British-ism, is that Clara said the “President of America.”  I don’t think this is something an American would ever say.  We say President of the United States [of America] exclusively.

We’ve heard the Doctor talk about “fixed points in time,” which have to unravel the way they do– he cannot affect these moments.  (Although, he usually does.)  In Kill the Moon, the Doctor talks about the opposite, the eloquently named “gray bits” that he can’t quite discern the outcome.  I like this explanation of sort of junctions in time.  It says a lot for the gravity of the situation.

“My granny used to put things on tumblr!”

The astronaut in 2048 says this with a hearty laugh, and I get a real kick out of it.  It’s a great illustration of technology in action, isn’t it?  I actually love this gag in general, that we have Courtney snapping iPhone photos on the moon 35 years in the future and posting them on tumblr from the Tardis.

I do find it slightly odd that Clara’s like, uh no I don’t have Courtney’s number, but she obviously knows her tumblr username.  Like, which is actually weirder?

The Doctor tells Courtney there are several DVDs onboard the Tardis which will take it (and if holding on correctly, her) to him.  Is this a little call-back to Blink?!  Clearly the Doctor has learned that he needs to keep a few of these on hand!

What did you guys think of Kill the Moon? 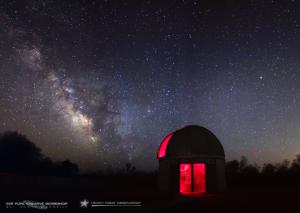 Last weekend I got to check an item off of my summer bucket list. I paid a visit to Charlestown, Rhode Island’s Frosty Drew Astronomical Observatory for some stargazing! I was fortunate enough that the night I visited happened to be the clearest view of Saturn of the season!

Every Friday night in the summer, Frosty Drew opens up for free public stargazing through their powerful telescope. The observatory opens at 6 PM to the public. A young volunteer provided some sky info and answer any questions while we waited in line. Inside the observatory, an astronomer was stationed by the telescope to point things out and answer additional questions.

We pulled up after 8:30 PM and the line was already long. The observatory itself is tiny—there were only 6 or so people inside at any given time. The sky darkened as we waited in line, and volunteers pointed out Mars and Spica in the sky. A bunch of telescopes were set up on the lawn around the observatory so there were other things to look at while we waited. We got a very up-close look at the super moon from a tabletop telescope. A man who literally just came as a hobby set up a large telescope and focused it on Mars, which through his telescope looked like a glow-y ring of fire.

It was 10 PM by the time my group got to the telescope, but man was it worth the wait! I had to gasp when I saw Saturn, small and white-ish, right in view! It was tipped on its side, its rings vertical. It looked lonely, in a way, but you could distinctly make out four other objects— at least two moons: Titan and Rhea. You could make out at least one division in the rings signifying that there is more than one. I was blown away! Saturn has always been my favorite planet, and the Frosty Drew frequent-ers all agreed it’s the most exciting to see.

They were showing Saturn last week, but weather conditions and the sky vary. I’d love to make another visit before the summer is over!