Well, I’ve sat with the Scream Queens finale for a day now, and I must say, my current feelings are the same as my initial thoughts: I hated the ending.  I want those 13 hours of my life back.

I mean, it’s kind of cool that the killer won.  I can support the bad guy winning.  What I can’t support is so blatantly having the most loved characters lose and ultimately, the story feeling so unfinished.

Correct me if I’m wrong, but the real stars of this show were the Chanels.  We loved Emma Roberts, Billie Lourd, and Abigail Breslin even though we suspected that one of them might be the killer at times.

The first episode of the finale was fine.  Grace almost died so we all cheered.  We found out the truth about Pete which we probably all suspected from the beginning.  I loved Chanel’s missive.  Loose ends were being tied up, but we waited until the last second to find out who the mastermind was.  Then, the second episode started and the rage set in.

Even as Hester explained her backstory, I maintained hope for what could turn out to be amazing Chanel revenge for an ending.  She pulled a twist, but I was expecting an even bigger twist to turn the story around.

Number Five’s parents disowning her felt unnecessarily harsh, but it really fell apart with the undeserved guilty verdict at the trial.  Grace and Zayday are apparently too stupid to see they’ve been tricked… only Dean Munsch gets it, but she’s a killer too.  The only saving grace seemed to be that the Chanels enjoyed the psychiatric hospital life.  The ending itself was perhaps a huge cliffhanger, but honestly, we don’t care by then.

What I want to know is: what was the story Scream Queens was trying to tell us?  Was this a twisted morality tale about mean girls?  If so, then why were the Chanels the likeable characters?

Simply, I don’t get the point.  I’m never upset I watched something, but this comes close.  Could a second season even save this for me? I’m not yet convinced.

Help me out, guys, what did I just watch?

And what did you think of the Scream Queens finale?

To be honest, Pete straight up told us he’s a murderer in this episode and I’m not sure I even know who the murderer is.  He doesn’t fit the profile!  It’s got to be a girl… right?!  Basically, I still have no idea.

What I do know is what I liked:

I still hate Grace.  Any chance she’s actually the killer?  Have you guys figured it out yet?!  Please; help a sister out!  Leave your theories in the comments! 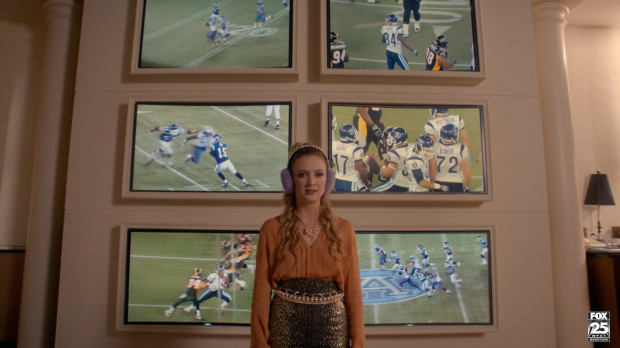 I hope everyone’s Thanksgiving was happier than this one!  Sorry for the lateness of this post, but I was busy enjoying my Thanksgiving!  Better late than never, right?  Anyway, I kind of loved the Scream Queens Thanksgiving.  Here are the things I’d like to say about it:

What are you guys thinking?! 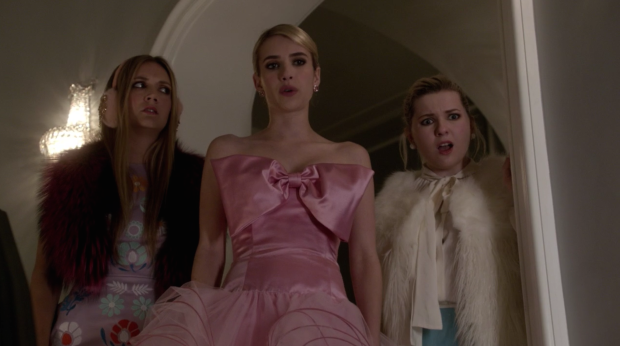 I think I wore this exact dress in the finale/prom scene in “Footloose” in high school.

There are only three episodes of Scream Queens left, and no word of a second season.  I’m still really enjoying this show, its cast, and the faux fur!  This episode did wonders for the plot, so let’s talk about it!

Give me your theories, people!

The Kappas have lost their final weirdo– Deaf Taylor Swift, Sam, and Jennifer the Candle Vlogger have all been killed by the Red Devils.  What else have we learned this week? 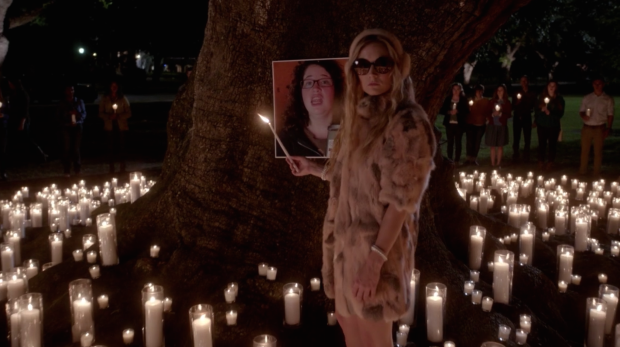 This was such a good episode that finally made me feel a little oriented in this mystery.  I can’t wait for more– I saw Lea Michele back in that neck brace in a preview!

How cruel of Scream Queens to delay this episode a whole week!  But it was a good one.  Here are my assorted thoughts and favorite quotes:

Can I just be really honest with you guys for a second?  Why does KKT allow Grace to wear such hideous clothes?  Like, I was never in a sorority, nor do I believe this to be a factual representation of one, but there seems to be quite a bit of conformity amongst the Chanels and the KKT sisters of the past.  If anything, Grace needs a fashion influence.  Her clothes actually offend me.  I love the color palette of KKT, even though I live a life of neutrals, this pastel paradise is the real me.  It reminds me of Sofia Coppola’s Marie Antoinette.

I think I’ve decided that Grace isn’t the protagonist of this show.  I hate her.  Do you?

As always, here are my thoughts on this week’s Scream Queens:

I think Chanel is looking less and less guilty as this show goes on.  I’ve never thought she was, but I don’t think you possibly could now.  What do you think?  Missing from this episode: all adults.  Any red devil theories?

In this week’s Scream Queens, Chanel’s haunted pumpkin patch is in action… whether or not Dean Munch allowed it.  It turns into Orange is the New Black for a hot second, and we learn A LOT.  Here are my thoughts:

Have a great weekend, loves! 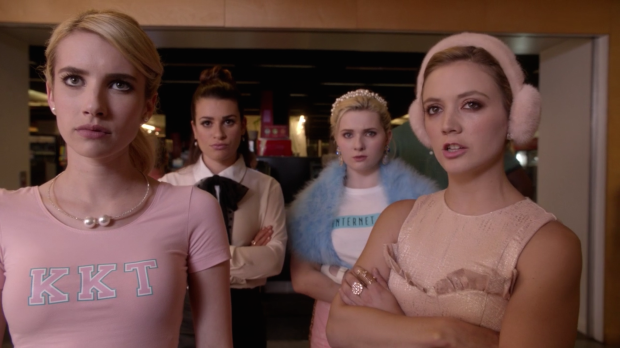 Hello friends!  Today we are switching Scream Queens + Face Off… mostly because the new episode of Face Off isn’t on xfinity to go yet and I don’t want to get out of my bed to watch on demand.

This week we got part one of two Halloween episodes, and I’m still completely in love with this show.  I didn’t get to live-tweet this week because I was super sick Tuesday.  Let’s make up for that now, with my thoughts on the episode: 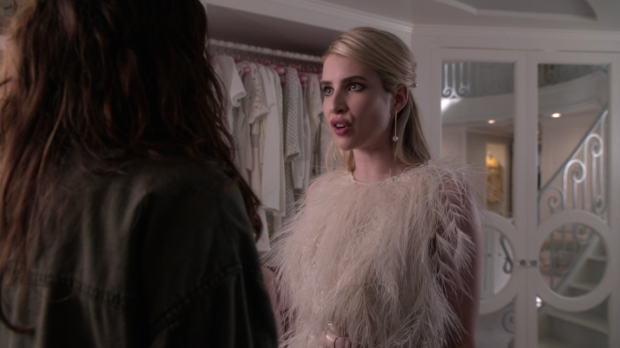 It’s October, so I hope you’re ready for all things spooky.  I’m continuing to enjoy Scream Queens, and the murdering continued with this week’s episode, “Chainsaw.”  RIP Coney, for real.  It’s Friday, so let’s relax and keep it casual.  Here are some thoughts on this week’s episodes:

And have wonderful weekends, loves!