I kept it simple when choosing my October box– I actually didn’t change or add a thing!  The October It Girl box was just so perfect, that I couldn’t wait to get these great colors from the Black Magic collection!

Here’s what I got:

These beautiful colors from the Black Magic Collection are perfect for Halloween, but also just great basics for any collection.  They look very neutral, like simple black & white, but pack a pretty punch! 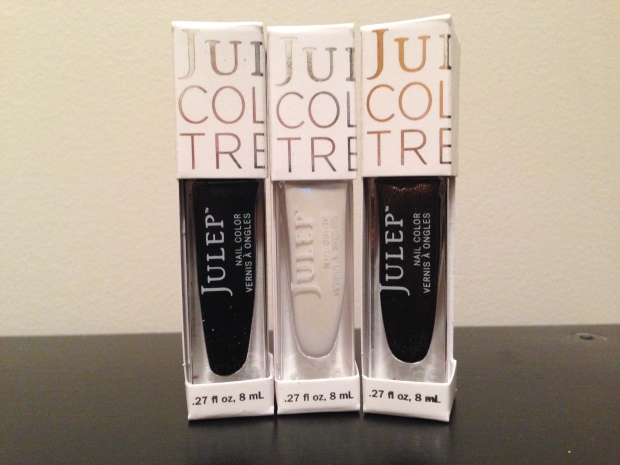 I’m obsessed with this card, and tucked it into the corner of my mirror.

Finally, I got candy corn in this box!  How cute!

Any other Julep Mavens out there?  What did your October box look like?

If you want to be a Maven, leave me your email address to get your first box free!

I’m loving season 4 of Game of Thrones so far, and I found last week’s episode particularly powerful and hilarious.  We got the big reveal behind Joffrey’s poisoning resulting from Sansa’s necklace, and we ended on another amazing show of power and intelligence from Dany, as the collars of the former slaves that now fight for her rained down upon the people of Mareen.  Before it turned sour, we got a fun little roleplay with Arya and the Hound gulping down rabbit stew.  The first laugh out loud moment for me came right at the beginning, during a rather suspicious conversation between Margaery and Olenna Tyrell.

“You may not have enjoyed watching him die, but you enjoyed it more than you would’ve enjoyed being married to him, I can promise you that.”

My favorite line, perhaps in the series, came from Tyrion.  His situation is bleak, falsely imprisoned for the murder of his nephew.  We all know Tyrion is too smart to have carried out this murder; he even says he wouldn’t have been gawking over the body if he’d known what was to happen.  He puzzles out who would want him framed for this, but is go-to person when something is amiss in his life is off-limits here…

” …but say what you will of Cersei; she loves her children.  She is the only one I’m certain had nothing to do with this murder, which makes it unique as King’s Landing murders go.“

Hah, is it just me or is Cersei’s craziness starting to get really fun?  Now that there aren’t any Starks around to threaten and things have gone awry for her, I’m enjoying seeing her on screen a lot.  And WOW are those dynamics with Jamie getting complicated!

Let’s hope tonight’s Game of Thrones is just as great as last week’s!