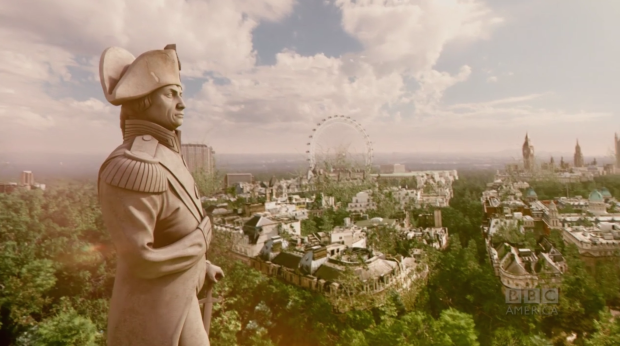 I liked “In the Forest of the Night” more than I expected to.  For an episode that takes place entire on (or, for a hot second, around) Earth, it felt Whovian enough.  Even though it involved so much Mr. Pink, (am I the only one who hates him?) he came in tolerable doses.

I really liked Maeve, who feels like an indigo child or a horror movie kid right away.  I knew the funny way she was running with her arms swatting in front of her face would come full circle, though that annoyed me every time she ran.  I liked how precocious she was.  I don’t understand how the disappearance of her sister left her strangely clairvoyant, and prophetic, but whatever.  She was cute and a bit creepy, and that made her interesting to me.

Maybe it’s because I watch too much SVU, but I was certain her sister was dead.  When the tree magic brought her back at the end, I was pleased to see she looked like a teenage runaway.

What I have a problem with is Mr. Pink yelling that Maeve was on medication and emotionally unstable in front of her other classmates.  While it seems that everyone knew full well of Maeve’s trauma, I found this disrespectful, especially for a teacher.  As a foil for Clara who was ready, willing, and able to run off with the Doctor and investigate, I think Danny failed on this account.  He removes the children from the Tardis and leads them through a forest of danger, when he could’ve stayed and protected them.  He’s not as perfect as everyone thinks her is.

I did like the philosophical question he brought up, and I even agree with him.  Spending time with certain people can be worth more than any adventure.  I was worried, though, that he talked Clara out of watching the solar flare.  I’m happy to see that she was still interested in that experience of a lifetime.

My other major problem comes in the form of Clara kissing Danny in front of the Coal Hill students.  That is not appropriate behavior!  Let alone the fact that they whole school already thinks they are in love.  This is an HR nightmare, you guys.

Oh, let’s not even start on how every year 8 student has been on the Tardis at this point.  It bothered me when the Doctor brought Courtney aboard, and it bothered me slightly less this time… but not so little that I wouldn’t mention it.

I do like the trees acting as a giant shield around the earth for an intense solar flare.  I like that Doctor said that humankind will simply forget, as that is our superpower.

Now, the finale, THAT looks interesting.  I’ve been thinking about the origin of Clara a lot lately.  Back int he Matt Smith days, Clara was so interesting to me– popping up in different times as slightly different people.  Clara’s life as a school teacher with her regular boyfriend is so painfully boring to me.  Looks like she’s going to get exciting again!

Teams left London for Las Vegas, Nevada.  I was cheering on the Brenchels, (I want them to have a Brenchel baby too!) and was psyched to learn Rachel lived in Vegas!

Upon landing in the US, a car picked up the teams and sent them to a desert to dig up a box reading “Property of David Copperfield.”  The Brenchels were the only ones to break the box open and reveal the keys before arriving at the clue.  (More good news!)  The first clue asks the teams, do you believe in magic?  David Copperfield himself put them to the test in the Roadblock.

In the illusion Roadblock, one teammate is locked in a box with the keys– they had to unlock the shackles, retrieve lockpicks from the top of the box, which was raised, and set on fire.  Once they were done, the other teammate presses a series of switches that dropped the boxes into a burning piling of wood in an explosion.  David Copperfield would then act concerned, and say they should call the fire department.  The previously boxed teammate would then come out dresses as a firefighter.  Cute!

Then it was off to the neon boneyard for the next clue.  The had to grab a lightbulb from a giant question mark, then head over to The Mirage.  At The Mirage, the next challenge came in the form of hoisting a teammate to the top and having them replace and count the light bulbs in the sign’s letter “I.”

One final Roadblock had Dave, Caroline, and Brendan skydiving to the finish line while their partners waited below with the eliminated racers.  So great to see my cowboys, Youtubers, Globetrotters, and Miss Mallory again!  This was such a great season.

As the winner came into view, no one could tell it was Dave until he landed.  Poor Rachel cried as Brendan came done, third overall; no Brenchel babies until Brendan graduates.

I’ve got to say, guys, all I wanted out of this season was for Dave and Connor not to win.  I guess the fact that Dave only said achilles twice this episode lessens the blow a little bit.  I’m all for firsts, so congratulations to him for being the oldest winner of the Race, and to both for being the first parent-child team to win.  I cry every single time a team crosses the finish line and this season was no exception.  I cannot wait for another season of the Race.  The All Star season was such a treat; let’s hope for some new, memorable faces next time around!

Some of my favorite moments of the season have to be Flight Time & Big Easy riding donkeys in Italy, and the Afghanimals rolling around in those inflatable bull balls.  Please share yours in the comments!

Teams leave Seville, Spain for Liverpool, England. There, they make their ways to Anfield Stadium, home of Liverpool FC, to score two goals each against a goalie.

Leo and Jamal take a detour and make it to Anfield first.  Jamal’s knee is still messed up from the bullying bulls.  They finish up as Dave and Connor arrive.  “I hope Dave and Connor go home!” says one of the Afghanimals.  Me too, buddy.

Jen and Caroline are terrible at soccer, but the Brenchels are pretty good!  They finish up next, just as Dave and Connor take the field.  You’d think Connor has a bad knee too from his kicks.  Oof.  Jennifer and Caroline manage to make their goals before the father-son team.

The next clue takes them to one of my favorite places I’ve ever been, WALES!  The drive shakes up the order of the teams, but at the aqueduct the teams encounter the Road Block: Poetry in Motion.  On the 15 minute boat ride, a teammate must learn a Welsh gypsy poem and recite it for a language specialist on the other side of the aqueduct.  If you didn’t know before, Welsh is a crazy language!  I really loved this challenge and found myself trying to recite the poem along with them. 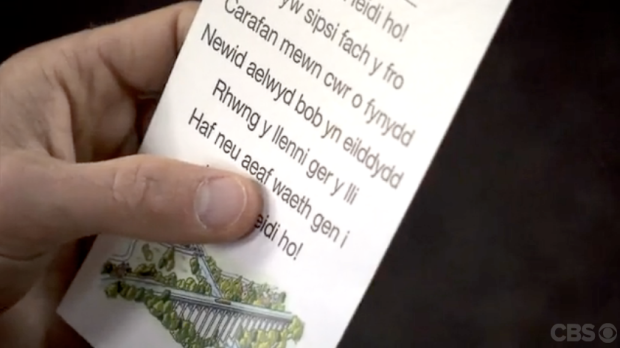 All the teams had to repeat the Road Block, but Brendan was the first to complete the challenge, followed closely by Caroline.  Jamal and Connor struggle a bit longer, but finish up in that order.

Now the teams are back to England for the Detour: Shoot It or Boot It.

In Shoot It, teams shoot at clay pigeons.  They must hit 16.  Caroline is surprisingly great at this!  The beat Dave and Connor through this side of the Detour.  In Boot It, the teams fill up a pair of Welly boots with water and throw them.  (I’m… not sure why…)  They must use size 9 or 11.  It actually looks pretty fun.  Brendan’s throws get the Brenchels through this pretty easily, until they realize that they’ve used size 10 Wellies instead of 9 or 11.  Jamal and Leo finally arrive as they are restarting.

The pit stop comes next, which determines the three teams racing for the million dollars.  The teams finish in this order:

So, arguably, the strongest team was eliminated!  The navigating ended up doing them in.  I’m going Brenchel all the way in the finale, but really, anyone but Dave and Connor would be great.  (Can he please. stop. mentioning his achilles?)

Who do you think will win it all?!

this is actually just my favorite thing. @mattchinese #ourlittlelyon #6weeksold
✨
and I’ll say I love you everyday ‘cause it’s true baby, I do 🤍
my view this morning 🤍 I have so many feelings about how much Luca has already grown, so through all my new mom anxiety, I’m stopping to appreciate these moments with #ourlittlelyon.
Follow nikkisee on WordPress.com