It’s the episode I’ve been waiting for!  Michael Voltaggio guest judges for a very fun Quickfire– the blindfolded taste test!  This is one of my favorite challenges from the best of the Gordon Ramsay shows, so I always like seeing it.

When all is said and done, Emily, Silva, and Shirley named the fewest ingredients.  Brooke, Sheldon, and Casey did the best.  Sheldon got 10, Casey got 11, and Brooke crushed the competition with 16!  (John goes unmentioned in the middle of the pack.)

The challenge for the week is to create a meal that is reminiscent of your childhood. END_OF_DOCUMENT_TOKEN_TO_BE_REPLACED

There is only one challenge in the finale: both girls cook an appetizer, entrée, and dessert, present them to Gordon, Christina, and Graham, all while their families and former competitors cheer them on from the balcony.

Here is what they make for their final stand in the MasterChef kitchen:

Down the left, we have Avery’s appetizer, cream of asparagus soup with smoked oysters, creme fraiche, and a Creole crouton; her entrée, lobster and crawfish etouffee with crispy okra; and dessert, strawberry and rhubarb shortcake with orange chantilly cream.

It was especially fun to see Christina during her first season of MasterChef Junior– while Gordon and Graham are well-acquainted with what ulta-talented kids can do, I think these girls knocked Christina’s socks off a little.  They always impress me, and I don’t even get to taste their creations!

The moment of truth comes, and it’s Addison for the win!

Congratulations to both girls!  What did you guys think about this season of MasterChef Junior?  I can’t wait to see another crop of kids come through this kitchen!

Can you believe this was the semi-final of MasterChef Junior?!  That means the final showdown is THIS WEEK.  And the news is even better than that… well, we’ll get to that as we recap last week’s episode.

Addison, Amaya, Avery, and Zac are the final four.  Gordon, Graham, and Christina present a table with four cloches under which the find the heads of their parents!  (No, don’t worry, their bodies are under the table.)  Amaya’s mom, Avery’s dad, Zac’s mom, and Addison’s dad each offer them some advice and present them with a gift box of their flavor ingredient for the upcoming challenge: soufflés!  Amaya will make a dark chocolate soufflé, Avery will make strawberry, Zac will make milk chocolate, and Addison will make blackberry.  Gordon makes a little pun about them “rising to the occasion,” and they really do!

Addison’s impressive rise literally made Christina gasp, and the judges agree that she is the winner of the challenge!  She gets the advantage in the finale Elimination Test.

Addison is presented with 4 cuts of pork and it’s her job to assign them.  She keeps ribs for herself, gives Amaya the loin, assigns Avery pork belly, and gives the tricky pig’s ears to Zac.

Here’s what they make:

Addison’s fall-off the bone ribs impress, but the plating and presentation don’t impress.  Zac’s pig’s ear salad looks amazing, but the cook in not right on the ears.  Avery’s braised pork belly is the clear winner, cooked to perfection and possibly Christina’s favorite dish she’s eaten in the MasterChef kitchen.  We knew poor Amaya was in trouble when she sliced her pork loin and saw the raw center.  She is able to bring the temperature up with a second cook, but it wasn’t enough.

Avery is awarded the first spot in the finale, and Addison the second!  These are my favorite two little cooks left and I can honestly not wait to see what they do in the finale!  AND HECK YES FOR A GIRL FINALLY WINNING THIS COMPETITION.

Who do you think will take the title?!  Who are you cheering for?!

Last week’s MasterChef Junior featured the top 6 home cooks preparing food for a Micheline star-studded group of guests.  The teams were catering a Gordon Ramsay party at his house!  We got to see beautiful views, his adorable dog, and a lot of normal Gordon Ramsay life activities, like the above.

Addison and Amaya, as the top two from the previous weeks, were team captains.  Amaya calls the coin toss and gets to add to her red team first– she chooses Zac and Avery.  Addison snags Kya and JJ for her blue team.

Both teams have trouble.  Amaya’s lack of leadership experience shows and Zac really ends up taking the lead on the team.  Amaya burns cabbage, has trouble with the venison temperatures, and both Gordon and Christina have to ask her if she’s okay.  It’s not pretty.  Likewise, the blue team is frazzled.  Kya burns some things too.  Worse, they are actually a portion short on their appetizers and Gordon takes that plate so not to embarrass himself in front of his guests.  The main course doesn’t go much better, as JJ spills a boiling pan of venison (straight out of the oven) directly on to Gordon Ramsay’s foot.  Maybe Gordon deserves that big ‘ol mansion to put up with these shenanigans.  He is actually a super great sport about it, running around in one shoe to help the kids finish and telling JJ it’s okay, but to get two more portions of venison going… which JJ promptly forgets.  Addison rallies her team which does finish strong.  It’s not enough, though.

Back in the MasterChef kitchen, the red team is declared the winner and Amaya, Zac, and Avery are saved from elimination.  As for the blue team, Gordon, Graham, and Christina have one person to save.  They choose Addison and break my heart by sending Kya home.  JJ is out too, but Kya hit me hart.  She was so cute about it, though, saying she can’t imagine what she’ll be doing at 18!  Truth, girl; you are so talented!

I honestly thought Kya was going all the way, guys!  My support is going to Avery now!  Who are you cheering on?!

I promised a second post for the second MasterChef Junior episode that aired last week, and here it is!  It’s just in time for tomorrow night’s new episode.

The top 8 came into the MasterChef kitchen to face a Mystery Box.  The theme of the day is besties, and Christina brings her bestie, her mom, in to introduce the Mystery Box.  When the kids pull up the box they see the ingredients Christina ate as a child, including chicken, broccoli, chocolate, strawberries, and “crispy rice cereal” of both the cocoa and fruity varieties.  The cooks get to Skype their besties of provided Surface tablets for inspiration, and then they cook! END_OF_DOCUMENT_TOKEN_TO_BE_REPLACED

Happy Monday, folks!  Now that post-holiday TV schedules are normalizing, so should the blog… err, kinda.  With two new MasterChef Junior episodes last week, you’ll get one recap now and another later this week!  Before the new episode, of course.

The first new episode, “Hatching a Plan,” featured Graham Elliot in a chicken costume to highlight the challenge ingredient: eggs!  It’s a deviled egg challenge, and deviled eggs are one of my absolute favorite things.  Only four of the top 10 get to play, though, and they determine who that is by cracking the eggs in Graham’s basket over his head– two eggs are red (Zac & Kamilly) and two are blue (Kya & Amaya) and their recipients make up the competing teams.

There’s a third team, though, a yellow team of Gordon and Graham.  All teams must make as many deviled eggs as possible.  Gordon and Graham, in their tiny aprons, get half the amount of time as the junior home cooks, though.  If they win, all the cooks must compete in the elimination.  Christina judges and Yellow only gets three perfect eggs!  The winners are Zac & Kamilly with ten, thus they get to sit the challenge out and await the top 8.

The elimination challenge is introduced by Graham, who talks about his first ever cookbook.  The kids have been asked to prepare their cookbooks as well.

Kya, you little achiever… you are the cutest thing!

The challenge is to cook their signature dish from their future cookbooks.  Here’s what the kids create: 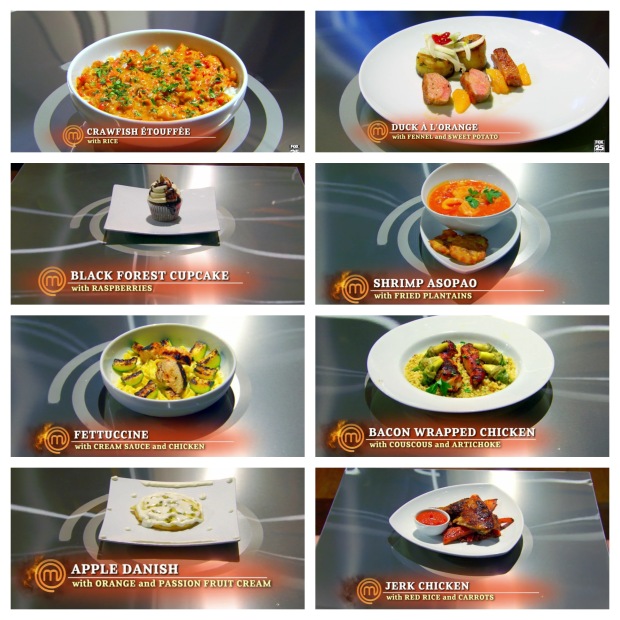 Avery & Amaya were at the top of the pack for this challenge!

Kaitlyn, Addison, and Corey found themselves ranking in the bottom.  Addison is typically so impressive, so I’m glad that she got another chance.  Sadly, Kaitlyn and Corey went home.

Stay tuned for the next episode recap later this week!

Last week’s MasterChef Junior featured a classic Gordon Ramsay challenge– taste it, make it– with a twist!  First off, the kids were blindfolded so they couldn’t use their sight to gather any details about the dish they were to consumer.  Secondly, I don’t think we’ve ever seen our junior take on this challenge!  I was especially surprised by the results.

We’re seen adults get the protein wrong with use of their eyes, so these kids seriously impressed me along with our judges– Gordon, Graham, and Christina.  The top tier was Kaitlyn, Kya, Ian, and Corey.  Kaitlyn and Kya win and end up team captains for the upcoming elimination challenge.

In 90 minutes, the teams of young home cooks must prepare 31 dishes for VIP grandmas!  Red’s clam bake faces Blue’s pork loin and the grandmas vote to see which team goes straight through to the top 10… Blue!

While the Red Team faces some eliminations, Gordon says that two teammates did not deserve to be in the bottom– Sam and Avery.  They head up to the balcony leaving Kya, Corey, Jesse, and Ian.  Kya was team captain, so you can see why she bears responsibility, but she obviously isn’t going home.  Jesse and Ian are, and I must say, these were the right choices, as hard as it was to see Kya’s team go down.

Different episode, huh?  I can’t wait to see the kids create something of their own next time around!

nikkisee
Create a free website or blog at WordPress.com.