Finally, Top Chef Boston is back!  It’s been forever for the viewers, but the chefs are fresh off of Katsuji’s elimination.  The episode starts with a PBR toast to him!

Andy Cohen (Boston University alum) and his college roommate, Dave Ansel, act as guest judges for the Quickfire.  Padma announces that it’s a ramen challenge!  While Top Chef provides the ramen, the rest of the ingredients are provided by my alumni network: Emerson College students!  Five Emerson students bring in bags of whatever food they had in their dorm rooms.  This is the pantry the chefs have to work with.  They pick blindly and hope for the best, because the winner of this Quickfire gets $5k!

It’s truly hilarious watching the cheftestants’ reactions to their ingredients!  I must admit, I probably was worse than some of these kids in college.  You can’t fit a lot in that mini-fridge!  Here’s what they come up with: 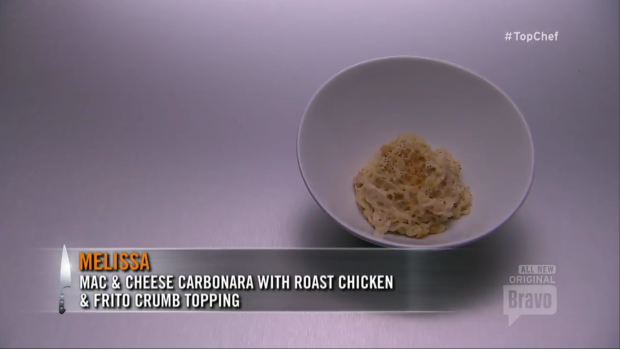 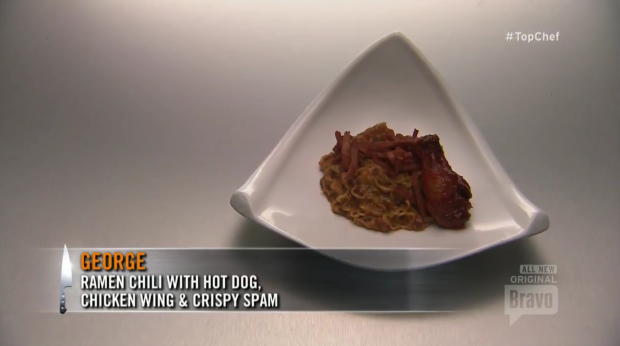 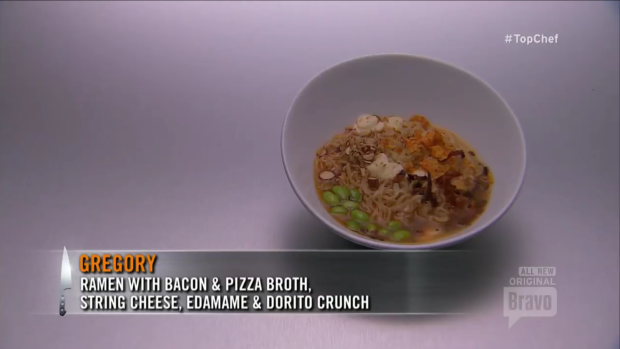 Andy & Dave don’t care for Mei’s for the lack of broth, and found Doug’s combination of ingredients strange.  Even though most people might find George’s meat-filled concoction off-putting, it worked for Andy and Dave.  They also liked Gregory’s bacon-pizza-broth and Melissa’s Frito crunch!  The winner of the Quickfire: Melissa!

Padma sends the cheftestants back to the stew room where they find a remote and a note to “press play.”  The TV lights up with Julia Child cooking with Jacques Pépin!  Watching the camera pan their faces as they watch Julia, you can see the pure magic her presence brings.  You cannot watch her cook without smiling.

In walks the real Jacques Pépin accompanied by Padma.  “I come with wine,” he says, “and a beautiful woman.”

The chefs ask Jacques about Julia, as their elimination challenge will be cooking to honor her!

To make this monumental task a little more nerve-wracking, the chefs serve to the judges– Padma, Tom, Hugh– Jacques, and a table of special guests including Food & Wine’s Dana Cowin, and Boston chef/restauranteur/celebrity Barbara Lynch.

In Julia’s honor, the chefs serve:

Gregory truly cooked in the spirit of Julia, and watching him do so was amazing! His coq au vin pleased the judges all around.

Mei’s take on duck a l’orange was cooked in Julia fashion, but with five spice to add her own twist. It was very well received!

George used the pressure cooker, which always makes me nervous. Even with that, his veal was not braised long enough.

Melissa braised in Julia-fashion, but feared her meat wouldn’t be tender enough… so she left it in the over all day resulting in over-cooking it.

Hugh, Tom, Padma, and Jacques sit at the judges’ table and announce that Mei and Gregory have the top dishes!  While they both took different approaches, ultimately Mei’s personal twist on the dish won it for her!  The remaining three in the bottom, and Dougie is asked to pack his knives.

This is another tough elimination.  I really feel like Dougie is one of the strongest chefs left, along with Mei and Gregory.  With the pack so small and everyone so talented, every elimination is rough.

We’re close to the end, sadly!

Leave me some thoughts in the comments, and tweet with me every Wednesday 10 pm East coast time!

The only negative of last week being a holiday week is that some of our shows were disrupted.  We had to wait two weeks for the new episode of Top Chef last night!  Luckily, it was a big episode… Restaurant Wars!

The teams meet Padma and a women who needs no introduction to Bostonians, Barbara Lynch!  The 8 remaining cheftestants already guessed that Restaurant Wars were upon them, but Padma and Barbara confirmed.  There’s no Quickfire this week, just Restaurant Wars.  The chefs drew knives.

Cooking has its share of hiccups as well.  Adam loses his clams somehow and ends up having to clean 130 more portions for service, but it works out!  Keriann decided to do a cold crêpe and make them ahead of time.  Katsuji points out (to us, not Keriann) that crêpes are cooked to order for a reason.  Katie ends up reworking this dessert last minute and the crêpes get served warm.

The first diners to show up and it’s our Boston girls Stephanie Cmar and Kristen Kish along with the Chase Sapphire VIP diners.  This group heads to Magellan while the judges– Tom, Padma, and Gail– plus Barbara check out Four Pigs.

Here’s what Four Pigs brought to the table: 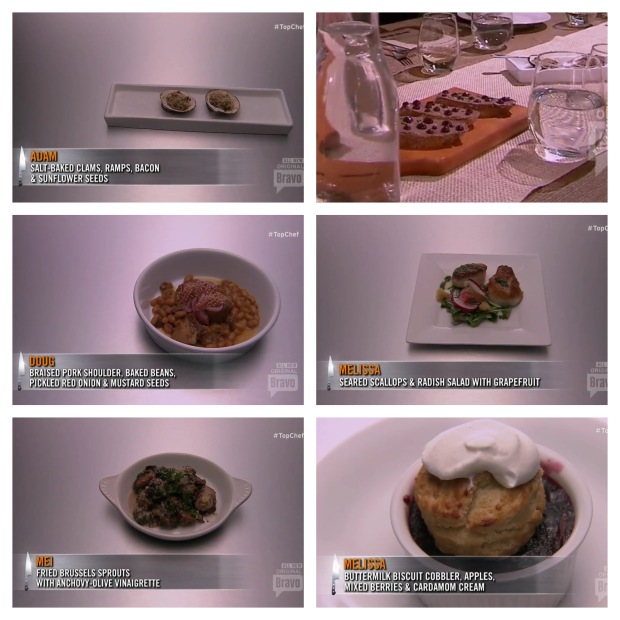 The top right is Mei’s chicken liver toast with plum purée. I caught the cap right as the image changed, so here’s a nicer view on the table.

The VIP groups switch and the judges see what Magellan offers:

Though a couple missteps are noted on the Gray Team’s behalf, there are some definite stand-out dishes, like Doug’s and Adam’s.  The cohesiveness of Four Pigs menu plus Adam’s amazing front of the house service puts them on top easily.

Orange had a lot of trouble with tickets and Keriann was no where to be found when the judges walked in.  Katie’s dish didn’t come together and Keriann’s was a failure.  I think either of them could have easily gone home, but it’s Keriann who’s sent packing her knives.

Do you think the judges made the right decision this week?

It looks like next week has a crazy Quickfire where one of our eliminated cheftestants could be headed back into the competition!  I’m so glad we don’t have to wait another two weeks!

Padma announces that the first Quickfire is a Sudden Death Quickfire, meaning the loser will face possible elimination.  There are going to be a couple of these this season, she warns.  The first part of the Quickfire is a favorite of mine, the miss en place relay race!  The 16 cheftestants break into 4 teams:

The relay is, of course, New England themed with the tasks being lobster, oysters, mackerel, and little neck clams.  Yum!

Blue team is out in front for the first three events, while yellow lags a bit.  Blue loses its lead at clams, because Katsuji has literally no idea how to open them.  It’s pretty painful to watch.  Ron on yellow makes up a lot of time, Green takes the lead and finishes just before them.  Blue gets their act together and slides into the third spot.  Red is the last to finish, meaning it’s time for part 2: the slowest person on the team is up for elimination.  The slowest is George, who also had trouble with clams.  He is to pick any cheftestant to cook against head-to-head.  If George wins, both stay.  If George loses, he goes home.

George picks Gregory, since he got the mackerel that George really wanted.

They have 20 minutes to cook.  Here’s what they come up with:

Richard calls George’s dish elegant, but in need of heat.  He warns Gregory of trying to do so much, seeing more opportunity to mess up when there are three dishes instead of just one. Gregory ends up winning, sending poor George home very early! I really feel bad for this guy.   Blais said he put his heart on that plate, and mine is breaking for him.

With one cheftestant down, the rest face the Elimination Challenge.  Their challenge is to create an updated version of the first dish they remember cooking– a nod to Boston’s historic nature– for a Top Chef Food Festival at the Museum of Science.  The next day, they get 3 hours to cook for 250 guests.

Here’s what everyone made:

END_OF_DOCUMENT_TOKEN_TO_BE_REPLACED

#ourlittlelyon or our little fox? 🦊
oh okay, you’re perfect 🤍
@mattchinese does maki!
this kid gave us the biggest giggles we’ve ever heard today 🤍 and his little #netflixandchill pose cracks me up! #ourlittlelyon #4monthsold
Follow nikkisee on WordPress.com