Smoke City really surprised me! I wasn’t so into it at first– the switching perspectives and snippets of newspaper and other media didn’t make it easy to get into the story– but I really connected with it emotionally by the end.

Specters are appearing all of the Los Angeles areas. These “smokes” only last for a few minutes. While they can be startling, they mostly just seem lost.

Meet Marvin– he remembers each and every one of his past lives, and they’ve all been horrible. He’s cursed to live a doomed life over and over again because he lit the fire that killed Joan of Arc. When a girl pops up on TV claiming that Joan has been reincarnated in her body, Marvin needs to meet her.

Then there’s Mike– he was once a great American artist, but his alcoholism has driven away his success, his talent, and his wife. Now he’s working at a fast food restaurant, destroying gallery windows in Portland, and generally spiraling out of control. When he hears that Candice, his now ex-wife who never quite gave up on helping him, has died, he needs to get to LA to her funeral.

And finally, Casper– he just wants to make a TV show about the smokes.

These three go on an unlikely road trip to LA, but what they really find is redemption. Keith Rosson’s “Smoke City” surprised me in its emotional depth. Even the detours (which to be clear, I am generally not a fan of) to characters like Brophy add up to something unique and special.

Want to read it for yourself?!  Here’s a giveaway!  (You can also win and Amazon gift card, so I’d follow that link!)

July’s end is always such a sad thing… man, does summer fly by!  Let’s revisit a couple of my favorite July moments. 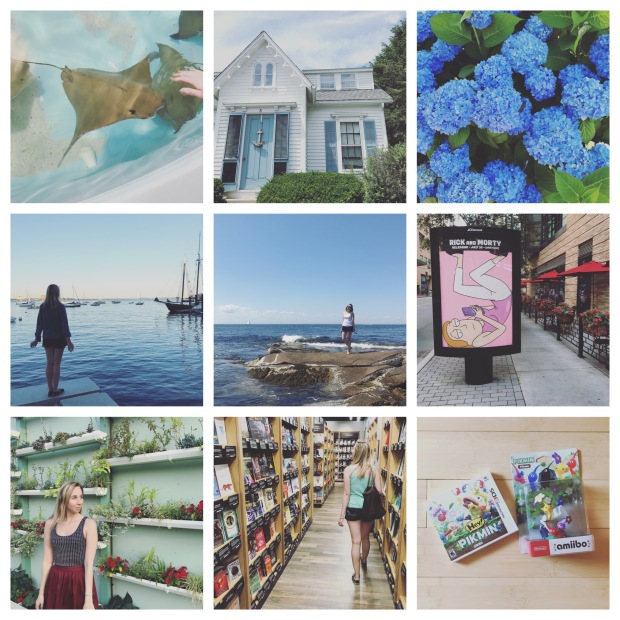 What was your favorite thing about July?  Any great August plans?  Follow along on instagram to see what I get up to!

A trip to Amazon Books and a little update about what I’ve been reading lately!

A dozen authors over at YA Author Rendezvous have put an awesome giveaway together – with over TWENTY chances to win!

One grand-prize winner will walk away with a signed, first edition hardback of Witch and Wizard which just so happens to be written by one of the biggest names in fiction – JAMES PATTERSON! On top of that, they get a $100 amazon gift-card!

And all if takes is a minute or two and a few clicks of the mouse.

Check out these other amazing prizes they have for you here.

And while you’re all excited about books, check out the video version of Tuesday’s post!

Okay, this is from just after Christmas… I may have been a little slow on the editing… just to clear up any confusion about why my Christmas tree is up.  Hey, at least I got it up before January is over!

I just recorded What I Read in January, so stay tuned for that!

The fact that we haven’t talked about the Pokémon 20th Anniversary yet is a travesty, people; I’m so sorry!  I’ve been a little… scattered, this week especially, but nothing pulls me out of moodiness the way this news can.

2016 marks the 20th anniversary of my favorite game franchise, Pokémon.  To celebrate, Nintendo and the Pokémon Company have lots of presents for us.

Let’s start with the Pokémon 20th Anniversary Edition New Nintendo 3DS bundle that almost makes me upset that I already own a New Nintendo 3DS.  The system comes with both Pokémon Red & Blue installed and two covers– one featuring Charizard and one Blastoise.  Do I need a second New Nintendo 3DS?  This is a serious question I’m asking myself.  This bundle is available February 27th.

On the off chance (aka responsible decision) that I don’t need another New 3DS, Pokémon Red, Pokémon Blue, and Pokémon Yellow are all available for download in the Nintendo e-shop, in all of their original glory.  I still own these games in their original Gameboy cartridge formats, but I’d say this is more convenient than loading AA batteries into my Gameboy color.  Add this to my to-do list for February 27th!

Perhaps the most exciting thing is the year of Mythical Pokémon distributions!  I’ve been marking my calendar to snag each of these:

There are also tons of products, including new TCG cards and rereleases of the movies, available to rent or own through iTunes, Amazon Video, and Google Play as of yesterday!

There’s more.  So much more.  We haven’t even talked about Pokken Tournament OR Pokémon Go.  I can’t even contain my excitement, so I’m going to sign off here.

What are you most excited about for 2016, the 20th Anniversary of Pokémon?!

It’s no secret that I watch a lot of really bad TV.  When you live alone, TV provides a pretty essential background of dialogue to remind you that there are other people on this planet.  I always have something playing; reality TV that you can completely tune out is perfect for background noise.  I keep it on while I play 3DS, while I write, while I browse online, and while I cook.  (But never while I’m reading; books deserve my full attention.)

I thought I’d take inventory of some of these horrible, guilty pleasure shows, and share them with you here.

I make every effort in life not to be a super girly girl, (simply because I’m not one!) but I do have a small fraction of my being that is a girl stereotype.  That part of me is the part that loves Four Weddings.  I’m such a sucker for weddings.  While the dress is probably my favorite part, I prefer Four Weddings to Say Yes to the Dress.  This show lets you see the full picture of four weddings in each episode, and thus gives you insight into all the other fun details of the day.  A friend of my friends was in an episode and I was dying to see that… so I purchased the season on Amazing Instant Video.  This is a great show to leave on as you go about your evening and you might find yourself planning your wedding while you do.

This is a car crash of a show: you simply can’t look away.  Complete with absolutely insane parents and ridiculously spoiled children, this show has a plethora of cringe-worthy moments.  Yet, there’s something about Toddlers and Tiaras I love.  I think it’s the poise of these well-polished girls, dressed eerily to look four times their age.  I’m not a parent, and I’d never make my kids do pageants if I were, but if for some reason my kids wanted to, I would go glitz.  Fake hair, fake teeth, tons of make-up: all par for the course.  The tanning I have a problem with, not because little kids shouldn’t be tanned (well, maybe.  But they also shouldn’t look 25.) but because I’m pale.  What’s wrong with being pale?  I’m not defending pageants at all.  I am not a fan.  However, I think a good contestant has a certain control over their movement that any dancer would envy.  I’m impressed and entertained by that full package.

One summer, my brother was interning in the city so he took up residence in my living room.  This wasn’t so bad for me; I simply had to move my no-pants-TV-time from the couch to my bedroom.  I fall asleep to TV, and reality TV you don’t care about is the perfect thing to keep on as you drift away.  Unfortunately for Joey, this was the summer that I was obsessed with Nanny 911 on Netflix.  Sounds of screaming kids wafted through the walls while I snoozed and he begged for silence to sleep.  I don’t know why I started watching Nanny 911.  Maybe I had eaten through everything interesting on Netflix.  After finishing that series, I moved on to Super Nanny, which is sadly the reason I started my Hulu Plus subscription.  Revisiting both, I think I like Super Nanny better.  It’s less gimmicky than Nanny 911, but either will do.  Just keep the volume down low if you’re planning on sleeping through the screams!

I guess I’m not feeling too guilty about watching these shows… one of these or a similar show plus the TV’s sleep timer is essential to my nightly routine!

What are you guilty pleasure shows?

nikkisee
Create a free website or blog at WordPress.com.