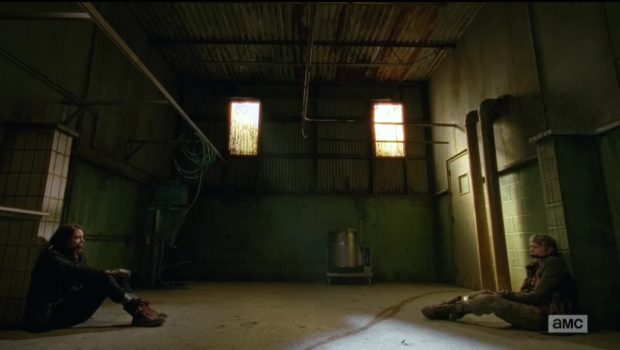 “You’re not the good guys.  You should know that.”

Last week, we were left worrying about what would happen to Carol and Maggie.  If you think Carol’s been acting weird for the past couple of weeks, you ain’t seen nothing yet.  This episode had a Carol like we’ve never seen before.

I frequently marvel at Carol’s transformation from scared housewife to complete and total badass.  Watching her regain her humanity is almost hard for me.  When you watch a show called The Walking Dead, you expect it to be pretty violent.  What I love about The Walking Dead is the depths of emotions it portrays.  Melissa McBride did a bang-up job in this episode!  It is taking some time for me, though, to mourn that killer Carol.  Her behavior at the beginning of the episode– the crucifix, the panic attack– didn’t feel warranted to me.  By the time I saw flashes of that killer Carol I figured she must have been playing them.  Was she?  By the end of the episode, when that Daryl/Carol connection is highlighted and we hear that she is not okay, I think maybe this is a union of old Carol and new… a newer Carol with that survival instinct plus humanity.  Like I said, it is going to take some getting used to.

Maggie and Glenn serve as a contrast in these last two episodes– watching Glenn struggle to kill vs. watching Maggie want to eradicate that whole compound.  When the door opened and they came gun to gun, the relief was there on Glenn’s face.  It seemed like Maggie only felt shock.  I love these two, and I’m kind of worried about Maggie.

So, Negan.  Is there a Negan?  I listened when that chick said we’re all Negan.  I could buy that there’s no leader.  One thing I’m pretty sure of: that dude Rick shot in the head was not Negan, despite his claims.  Thoughts?!