Can you believe this was the semi-final of MasterChef Junior?!  That means the final showdown is THIS WEEK.  And the news is even better than that… well, we’ll get to that as we recap last week’s episode.

Addison, Amaya, Avery, and Zac are the final four.  Gordon, Graham, and Christina present a table with four cloches under which the find the heads of their parents!  (No, don’t worry, their bodies are under the table.)  Amaya’s mom, Avery’s dad, Zac’s mom, and Addison’s dad each offer them some advice and present them with a gift box of their flavor ingredient for the upcoming challenge: soufflés!  Amaya will make a dark chocolate soufflé, Avery will make strawberry, Zac will make milk chocolate, and Addison will make blackberry.  Gordon makes a little pun about them “rising to the occasion,” and they really do!

Addison’s impressive rise literally made Christina gasp, and the judges agree that she is the winner of the challenge!  She gets the advantage in the finale Elimination Test.

Addison is presented with 4 cuts of pork and it’s her job to assign them.  She keeps ribs for herself, gives Amaya the loin, assigns Avery pork belly, and gives the tricky pig’s ears to Zac.

Here’s what they make: 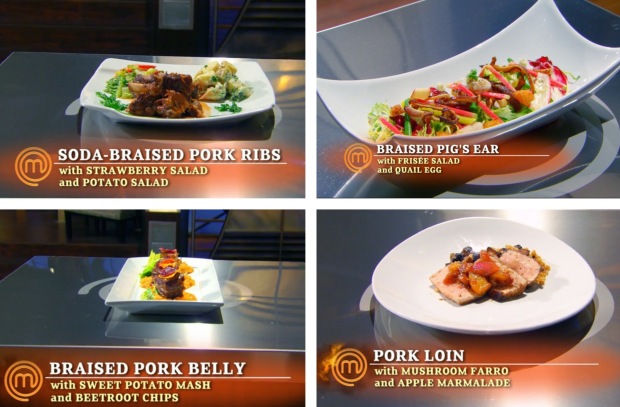 Addison’s fall-off the bone ribs impress, but the plating and presentation don’t impress.  Zac’s pig’s ear salad looks amazing, but the cook in not right on the ears.  Avery’s braised pork belly is the clear winner, cooked to perfection and possibly Christina’s favorite dish she’s eaten in the MasterChef kitchen.  We knew poor Amaya was in trouble when she sliced her pork loin and saw the raw center.  She is able to bring the temperature up with a second cook, but it wasn’t enough.

Avery is awarded the first spot in the finale, and Addison the second!  These are my favorite two little cooks left and I can honestly not wait to see what they do in the finale!  AND HECK YES FOR A GIRL FINALLY WINNING THIS COMPETITION.

Who do you think will take the title?!  Who are you cheering for?!