Happy Monday, folks!  Now that post-holiday TV schedules are normalizing, so should the blog… err, kinda.  With two new MasterChef Junior episodes last week, you’ll get one recap now and another later this week!  Before the new episode, of course.

The first new episode, “Hatching a Plan,” featured Graham Elliot in a chicken costume to highlight the challenge ingredient: eggs!  It’s a deviled egg challenge, and deviled eggs are one of my absolute favorite things.  Only four of the top 10 get to play, though, and they determine who that is by cracking the eggs in Graham’s basket over his head– two eggs are red (Zac & Kamilly) and two are blue (Kya & Amaya) and their recipients make up the competing teams.

There’s a third team, though, a yellow team of Gordon and Graham.  All teams must make as many deviled eggs as possible.  Gordon and Graham, in their tiny aprons, get half the amount of time as the junior home cooks, though.  If they win, all the cooks must compete in the elimination.  Christina judges and Yellow only gets three perfect eggs!  The winners are Zac & Kamilly with ten, thus they get to sit the challenge out and await the top 8.

The elimination challenge is introduced by Graham, who talks about his first ever cookbook.  The kids have been asked to prepare their cookbooks as well. 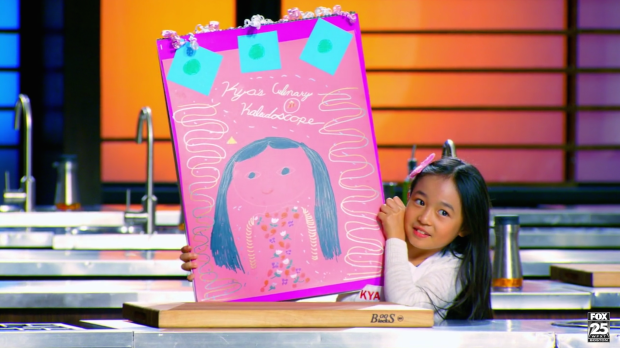 Kya, you little achiever… you are the cutest thing!

The challenge is to cook their signature dish from their future cookbooks.  Here’s what the kids create:

Avery & Amaya were at the top of the pack for this challenge!

Kaitlyn, Addison, and Corey found themselves ranking in the bottom.  Addison is typically so impressive, so I’m glad that she got another chance.  Sadly, Kaitlyn and Corey went home.

Stay tuned for the next episode recap later this week!