Yesterday, my best friend announced we were in a fight.  Apparently I didn’t give her adequate notice that her number one girl crush, Chrissy Teigen, was on my favorite show, Top Chef.  I can’t say I blame her.

Not only was Chrissy Teigen a supreme joy, but this episode featured a Big Gay Wedding– 25 couples! and was enough to bring tears to my eyes.

But let’s get back to the dates.  The chefs pull up to a date farm and gather their Quickfire ingredients.  They meet Padma and Chrissy in the kitchen of a culinary school to cook.  Their task: to recreate the best date (of the romantic variety) they ever had by featuring dates… the fruit, that is.

It’s a cute idea, and Carl’s milkshake date was so cute to hear about.  Chrissy Teigen is the cutest of all, though, as a Top Chef fan herself.  She comments on Padma’s well-honed poker face too.   The least successful dishes were made by Chad, Phillip, and Carl.  The top dishes were made by Jason, Isaac, and Giselle.  Jason is the winner and Chrissy yells, “immunity!” to tell him what he’s won.  She can come back any freaking time.

Art Smith announces the elimination challenge, catering a wedding for 25 same-sex couples officiated by the lovely Padma, who promises a killer outfit for the occasion.  Art recalls his own wedding cake disaster from Top Chef and says he will supply the cake.  The chefs gather is various pairs to create the menu for the very special event: 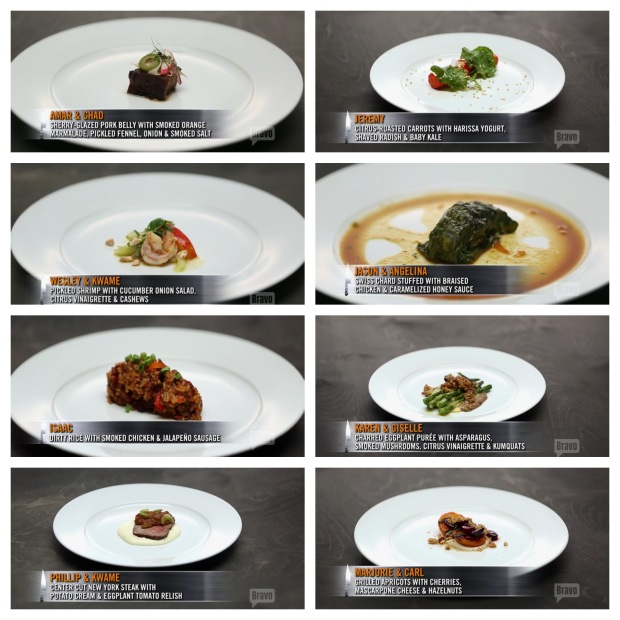 Tom, Padma, and Gail have the pleasure of tasting and judging along with Art.  Most of the dishes are absolutely delicious, to the point where Tom is nervous that they won’t have any bottom dishes.  With so many top dishes, the decision is difficult, but the select Wesley & Kwame’s shrimp dish and award Kwame the win!

The only two dishes they disliked were made by Phillip & Kwame, and Karen & Giselle.  Kwame is a little confused, but Padma assures him his sauce was the best part of the dish and he is not going home.  The choice is between Phillip, whose whipped cream potatoes didn’t work for the judges but came out to his liking; Karen, who did all the work on a poorly executed dish; and Giselle, who seemingly did nothing.  Gail pointed this out, and thus, Padma announces that Giselle must pack her knives and go.

It was the right decision, and I must say: I enjoyed watching Phillip get some grief– he’s not that wonderful!

I’m so glad Kwame has another win; this kid is awesome!

The worst thing about the holidays was certainly the lack of Top Chef, so I can’t wait for more.  Who are you cheering on?!