As soon as this week’s MasterChef started, I was nervous.  Gordon, Graham, and Christina announced that it would be a team challenge.  Who picks the teams?  Last week’s winner, Nick, of course.  He picks Claudia, putting Stephen and Derrick on the same team again.  The winning team goes straight through to the semi final.  The losing faces off in a pressure test.  I’m nervous, because ALL I want is Stephen and Derrick in the finals, and if they don’t win… ahh!

Three ingredient-filled boxes are wheeled out, one with each judges’ name on it.  All three will feature in the episode, but for now, we’re just dealing with Gordon’s and Graham’s.  Inside are signature ingredients for each chef.  These are what the home cooks are to use to create an appetizer and an entreé.  Gordon and Graham each made about 30 to dishes to inspire them.  Christina hands out two fortune cookies to see which team gets which box.  The Blue Team of Stephen and Derrick gets Gordon’s.  The Red Team of Claudia and Nick gets Graham’s.

It’s nerve-wracking and dysfunctional, but here’s what they come up with: 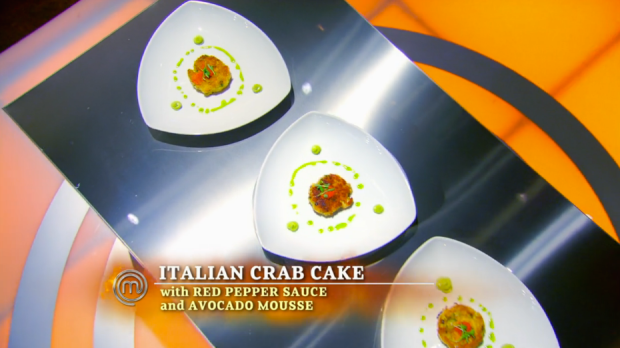 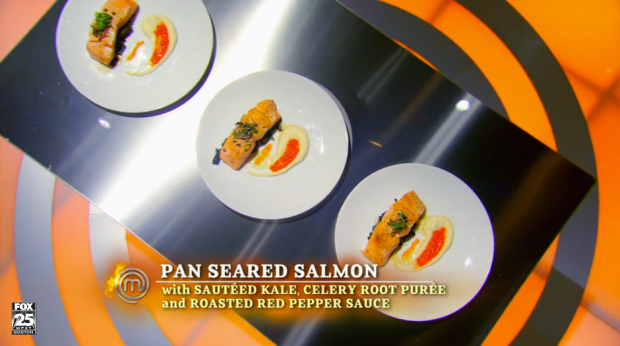 AND THE BLUE TEAM WINS.  All my fears are gone.  I don’t even care who the third is.  (I’m actually cheering on Claudia.)

The pressure test is a dessert from Christina’s box.  She also brings out a beautiful dessert table for inspiration.  She asks Nick and Claudia which they think the most difficult is.  Nick points of macaroons and the croque en bouche.  Claudia thinks the layered cheesecake or the pavlova.  Christina has other thoughts: her chocolate malt layer cake.  She gives them her basic recipe and 90 mins to tackle this cake it takes months to master.  I’m invested again.

Derrick yelling “start decorating!” at Claudia about sums up my feelings while watching this.

Claudia’s cake looks a mess, but Christina says, it’s the inside that counts.  Christina marvels at how light and fluffy her cake is.  Graham notes her proportions are off, though.

Nick’s pretty cake is up next.  Christina thinks the cake is a bit short and Nick admits he messed with the proportions, but gosh do those layers look lovely!  It’s all in the taste, though.  Christina takes a bite and walks away without saying anything.  Back with Graham and Gordon, she whispers that there’s something not quite right about the cake.  Gordon tells us: it’s too sweet because of the changed proportions.

So who goes home?!  Taste wins in the end: Nick goes home, and Claudia’s in the semi finals.

WOW what an episode.  What did you guys think?!