Last week, the designers were taken aboard a cruise ship to announce their challenge.  Seven suitcases boasted seven fabulous destinations to serve as inspiration for a day-to-night vacation look.  Fourteen designers for seven suitcases meant this would be their first team challenge.

Tim brings out the dreaded button bag to get it all started.  Amanda and Gabby are the first pair drawn and they select their location first: the South of France.  Ashley & Candice are drawn next, and they chose Venice.  Lindsay & Jake are partnered up and select Hong Kong.  Laurie & Swapnil select India.  Kelly & Blake take the Greek Isles.  Edmond (who has immunity) and Hanmiao pick the Caribbean.  Merline and Joseph are left together and the St. Petersburg.

It’s not smooth sailing for all the teams once they get to work.  Two different points of view clash for Edmond and Hanmiao.  Edmond makes very feminine clothes, but Hanmiao prefers structure.  Hanmiao seems unable to communicate anything but that fact.  Lindsay’s ideas all get shot down by Jake, but he doesn’t seem to offer any suggestions of his own.  Joseph decided Merline would annoy him before they even began, so he “put her on lockdown” and wouldn’t let her sing/dance/act like herself… or even contribute any ideas.  While I admit, she’s been a bit much, her ideas have always been well received by the judges.

The other pairs are getting along perfectly– Laurie & Swapnil are integrating bits of each other into one finished product, Ashley & Candice are inspired by each other’s style and the fabrics from their suitcase, Amanda & Gabby seems to share a point of view, and Kelly & Blake are perfectly aligned on their Greek goddess garment.  Here’s what the teams come up with:

After endless fighting with Jake, Lindsay somehow manages to create this. She did, however, have to do all of the work by herself. 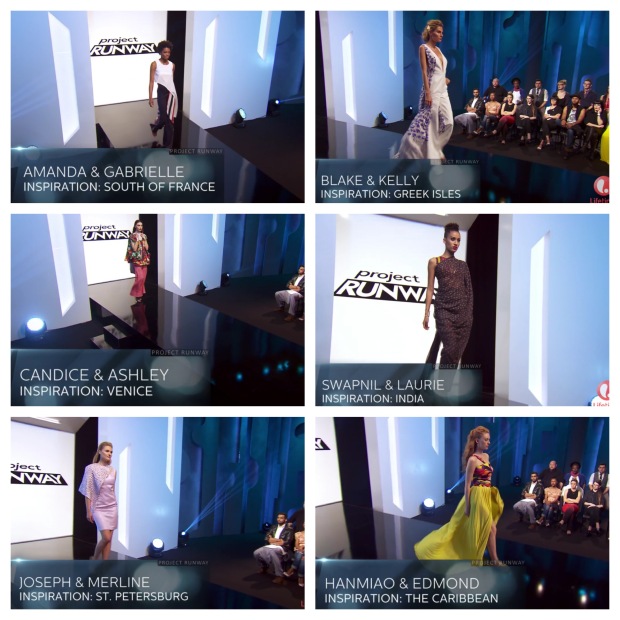 The choice comes down to Hanmiao and Merline for who’s out.  If it were up to me, I’d have chosen Joseph to be out, believing he’s more at fault for a bad garment than both of these ladies.  Between the two, though, Hanmiao is out.  I agree with this decision, even though I’d enjoyed her thus far!  I do think Merline has more to accomplish.

What did you think of last week’s elimination?!