“Ruthless in Purpose, and Insidious in Mind” certainly reminded me how tangled the alliances are in Orphan Black!  It all starts, thrillingly, with Krystal, a clone we’ve never met before. 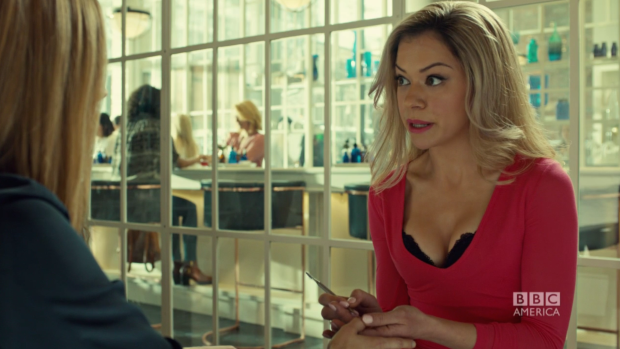 Krystal Goderich works in a nail salon.  Her boyfriend has recently died.  While she may not be the smartest person in the world, she’s not the dumbest either.  She’s noticed that her relationships come in two year cycles.  She’s met the Castor clones.  She’s scared and suspicious… but of what, she doesn’t know.  When we meet Krystal, she’s doing Delphine’s nails.

Alison is back in the action!  She’s got Helena and Gracie staying with her and working at Bubbles.  Helena is helping make soap.  Gracie, presumably, will be in the store learning how to socially interact with people.  Helena (I assume, thanks to S!) has developed new social skills as well.  She hugs Gracie in the storeroom telling her she will be aunt to her babies.  She’s hidden her tank of embryos in said storeroom as well.  The drug trade is still going on behind the scenes for Alison, Donnie, and Jason.  Jason and Alison kiss for real this time before Donnie snatches her phone and secretly plans to meet Jason… who beats the shit out of him.

On the Dyad front, Cosima is not doing well.  Delphine tells her she will need another treatment from Kira’s stem cells soon.  Delphine is showing a lot of genuine concern.  Triggered by something Shay said, Cosima’s been thinking about Delphine too.  Meanwhile, Scott is facilitating the conversation between Rachel and Sarah.  Rachel will translate the book if Sarah helps her escape Dyad.  Rachel pitches Krystal as her way out.  Sarah and Fe pay a visit to Krystal to steal her identity for Rachel.

Fe puts on a brilliant (what I would call American, but I suppose is) Canadian accent to work her for her pass codes.  He is shaken, though, by Krystal’s struggles.  He can tell that she knows so much.  When he snatches her wallet, he sees that she’s been investigating Castor and almost has it together.  Sarah admits that not being able to put your finger on it is the worst part.  Before sending him in, though, she said the Clone Club needs no new members.  It breaks my heart and Fe’s to hear Krystal strife.  He breaks into his “truth voice” to tell her she’s one of a kind, and she’s not alone.  Locking up that evening, Krystal is confronted by Dr. Nealon.

Side note: Scott is my dream man. His apartment is perfection, and he’s been playing Portal 2!!

Rudy steals the book from Scott, though.  Scott calls Delphine, who is literally furious.  There’s a copy, and although they tell Delphine there isn’t, she knows there is.  As part of the distraction to get Rachel out, Cosima puts her resignation in to Delphine.  They share a kiss, but Delphine breaks it off.  Her resignation and (surprise to him) Scott’s is accepted by the end of the episode.

This copy is with Rachel being translated at S’s house with Sarah and Fe when Dr. Nealon busts in.  Rachel, apparently, has a seizure and is taken back to Dyad.

Only then do we see that Nealon was working for Rachel.  The comatose “Rachel” housed in Dyad is actually Krystal.  Rachel’s off to get a new synthetic eye.  Delphine left Cosima with a folder full of evidence that Shay is a Castor plant.  Rachel left Sarah, S, and Fe with only one translated page which will bring them to London.

This episode was AWESOME and I’m always so excited to see more!  Do you guys think we’ll get more Krystal?  How about actual Rachel?  What are Scott and Cosima going to get up to now?  And off that preview for next week: how much of a badass is S?!

Let me know what you thought!