Okay guys, “Certain Agony of the Battlefield” may have brought certain death to soldier Paul, but the episode brought pure delight to me!  This was the best episode of the season so far.  Though each of the clones have pretty separate storylines, I was equally interested in them this time around.  Let’s talk about our girls! 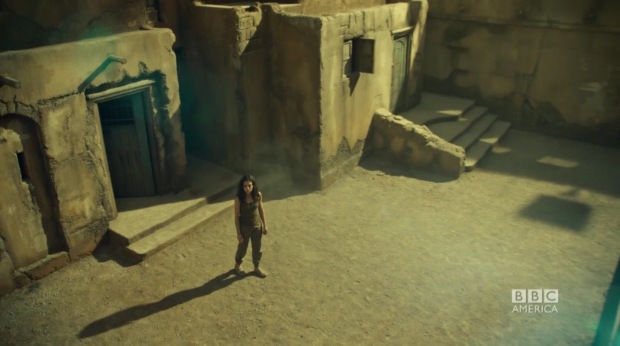 Sarah spends a lot of this episode having cryptic dreams.  At first, she seemingly awakens to an empty compound.  She follows the giggling of Kira, who ribbon dances and leads her around to the fort where she was once captured by Rudy.  Inside, Sarah sees herself hooked up to Rudy, receiving his blood.  She wakes up for real and throws up.  Kira, by the way, is still safe with her father.  She video chats with S and Fe and wonders where her mother is.  Sarah runs a horrible fever, having actually received Rudy’s blood.

Paul is trying to help her.  We see Paul hand over a book of notes and locks of hair on women a Castor Clone has been with.  This is not what he signed up for.  We’ll get back to these two at the end.

Alison‘s storyline is introduced hilariously, with rap music and Donnie and Alison dancing dirty and twerking, literally makin’ it rain money and glitter on their bed.  Their daughter walks in horrified.  These two are PRICELESS this season!  They’ve paid back JJ in full, but Alison wants to expand their drug empire.  She is prepared to take over her mother’s store, Bubbles, and continue laundering money via soap.  I hate that she’s not been involved with her sisters, but I love her and Donnie this season!

Cosima and Shay are getting along well.  It seems like a real relationship is forming!  Delphine is back and I have so much animosity for her.  I am glad when Cosima snubs her.  hineI feel bad for her for like a milisecond, but then it’s revealed that Delphine is the one creeping on Cosima and Shay.  For shame!  Anyway, Delp reveals that Cosima and Scott missed that both Gracie and the Castor clone have an identical abnormal protein.  They bring Gracie in for additional testing. 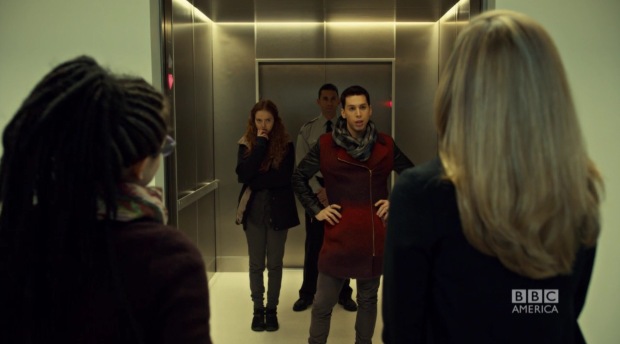 Fe is feeling desperate to locate Sarah.  He figures if anyone knows anything about Castor, it’s Rachel.  He makes Scott bring him to her.  She’s doing some art therapy.  Felix is not kind to Rachel.  She kind of breaks my heart, crying while she paints and stares at a picture of her younger self with her father.  It’s Scott that notices that Rachel is painting the symbols from her father’s book.

And to wrap up the plot, it’s Paul and Sarah.  Sarah’s next dream involves baby clone Charlotte and the woman that brought her into all of this, Beth.  It was so good to see both of them!  I’m really interested in Charlotte in general, and I love that this actress also plays young Rachel!  Seeing Beth finally come to life was so interesting as well.  Anyway, it’s Paul that breaks into Coady’s office and realizes that they are sterilizing women.  He takes over the facility and holds Coady.  Mark actually helps Paul and Sarah.  Rudy’s the renegade, though.  Paul is injured and helps Sarah escape without him.  Coady may pump him full of bullets, but it’s Paul’s grenade that puts a stop to what’s going on here.

Sarah, escaping in tunnels below, is met by Helena who has returned for her.

SO GOOD.  What did you all think?!