Six weeks after our last elimination in Boston, Melissa, Mei, and Gregory arrive in Mexico.  Melissa, originally trying to prove something to her father has let that go and is ready to win for her.  Mei, determined from the beginning since she works for Michael Voltaggio, a Top Chef winner, has been sent training at Top Chef runner-up Bryan Voltaggio’s restaurant Volt.  Gregory, worried about his weaker second half of the competition, is back with a lot to prove.

The three are greeted by Tom and brought to the last battle of Last Chance Kitchen, Adam versus Dougie, going on before their eyes!  Dougie is declared the winner, which I am so pleased about.  He deserves a spot in the final.  The new final four are sent to meet Padma for the Quickfire.

Guest judge Enrique Olvera is there to help Padma announce the challenge.  One of the most popular foods in San Miguel de Allende is the prickly pear.  They will be highlighting the xoconostle, the sour fruit of a cactus.  Here’s what they make: 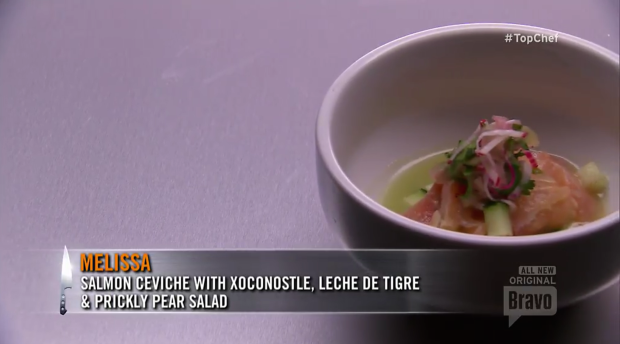 Enrique ranks Gregory and Mei on the bottom and Doug and Melissa on the top.  Doug wins!  He gets an advantage in the elimination challenge.

Now, this elimination challenge is super cool.  San Miguel de Allende is a mecca for artists.  The chefs are to create a dish inspired by an artist’s work!  While they cook, the artists will create a piece alongside them.  They will be cooking for 150 people!  Here’s where Doug’s advantage comes in, as the eliminated chefs step into sight.

Doug gets to pick his two sous chefs first, and he selects Adam and Katsuji!  Melissa snags George and James.  Mei picks Rebecca and KeriAnn.  Gregory chooses Katie and Stacey.

Gregory’s artist is Artemio Sepúlveda.  Artemio uses a lot of earth tones.  Gregory finds his inspiration in his use of light within mostly darkness.  He will be painting a peasant who plants seeds, which Gregory finds as a perfect symbol for a chef.

Doug’s artist is Merry Calderoni.  He bonds with her immediately, as he is from Texas, his mother is an art teacher from Texas, and her work inspires him to cool the tastes of home.

Mei’s artist is Béa Aaronson, who has a personality as bright as her works.  It’s nice to see the usually serious Mei smile and laugh with her.  She finds the bright color inspiring, and specifically draws from a painting of a bird/fish spirit animal.

Melissa’s artist is Leonardo Diaz.  His work is actually my favorite!  He has a cool graffiti style with lots of blues and hot pinks.  While visually appealing, Melissa worries that these colors do not naturally occur in food.  Leonardo improvises in his work, and so Melissa embraces improvisation in her cooking… and shopping!  They have to shop in Spanish– yikes!

The artists, though painting alongside, are so interested in what their chefs are doing.  It’s an amazing and inspiring creative process.  Padma, Tom, and Gail walk around to taste the finished products… well, the edible ones!

The chefs create these dishes: 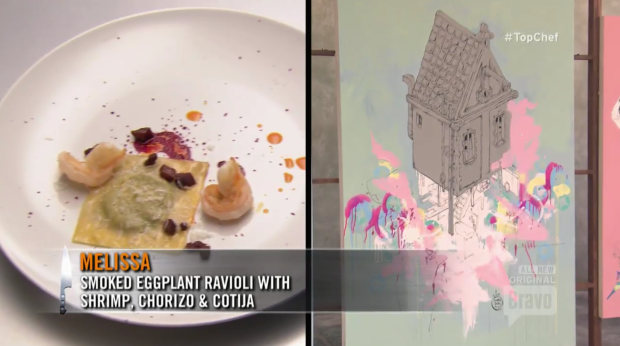 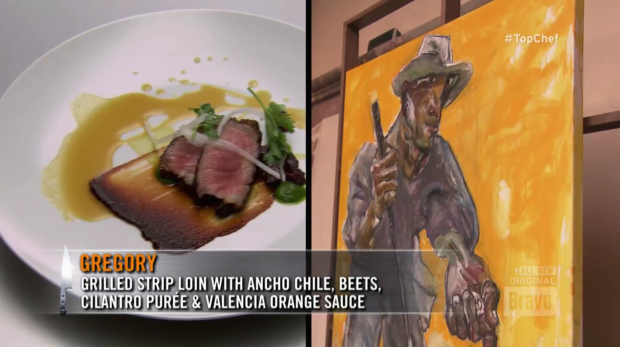 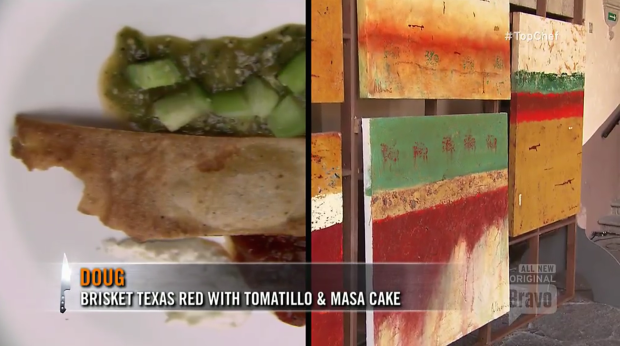 The judges really enjoy everything they eat.  …And drink, as Gail leaves with a, “Can we drink more tequila?”  Padma concurs.  Gail, let’s hang out.

At the judges’ table, more tequila presumably present, the winner is announced. 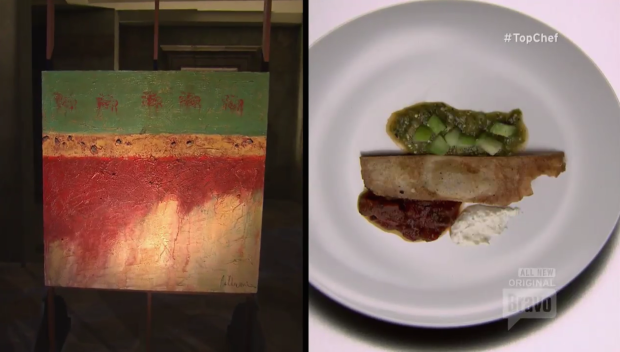 Greg is the other chef on top tonight, which sadly mans only one woman will be in the final.  Mei gets that last spot, and Melissa has to pack her knives.  “You did nothing wrong,” say Tom, “You just came up against three dishes that were stronger.”

I’m so sad to see Melissa’s Top Chef journey end, but if I had to pick who earned these three spots at any point in the competition, it would’ve been Mei, Gregory, and Dougie.  I can’t wait to see who takes the title next week!