This week was the finale of MasterChef Junior 2!  It was 12-year-old Samuel from Greenbrae, CA vs. 11-year-old Logan from Memphis, TN.  As you know if you’ve been reading these posts, I’ve been rooting for Logan for a while!

Samuel, with his expensive taste, reminds me a lot of last season’s winner, Alexander.  Logan, with his bowties and big smiles completely won me over!

It’s nice to see some familiar faces on the balcony cheering these two on to victory with their family & friends.  I spy Oona, Abby, Adaiah, Natalie, Berry, Sean, Levi, Mitchell, Sam, and Josh.

The two lay out their menus for their three course meal and impress the judges and former contestants.  Abby says, “Logan’s menu is like my math class.  It’s super duper hard!”

Logan makes some fanfare with his smoking gun while Samuel messes with some liquid nitrogen.  The smoking technique not only accomplishes Logan’s flavor goal, but amuses the entire balcony.  He says it’s every boy’s two favorite things– fire, and a little plastic nerf gun!

When time is up, Samuel and Logan bring their courses into the MasterChef dining room to serve to Gordon, Graham, and Joe. 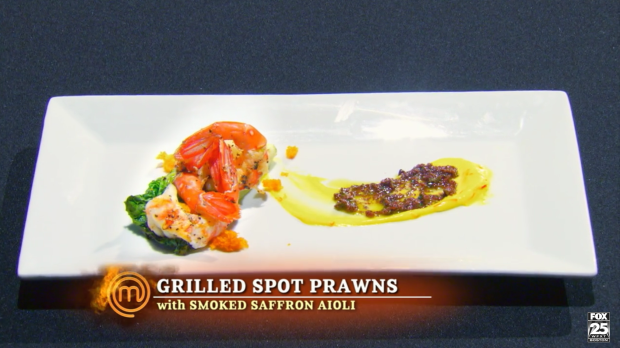 Congratulations, Logan!  This kid totally deserved the win, but all contestants are fabulously talented!

A brand new season starts January 6th.  I hope you’ll join me then for another season of this amazing show!

What did you think of the finale?!