The three champions from last week– Oona, Sean, and Samuel– are called out to compete in a pancake stacking challenge.  Oona, champion of my heart, asks, “Pancakes?  I’m more of an eggs Benedict gal.”  She just gets me.

A line of pans but just one plate await each of these three, while buckets of syrup wait precariously over the heads of our judges.  Oona is stacking to save Gordon from a syrup shower.  Sean is stacking to keep Joe safe and not sticky.  Samuel is flipping for Graham’s well being.  The biggest stack wins!

Oona’s facial expressions are everything.

Oona knows she is not off to a greta start, claiming that she is not the “maestro of pancake flippery.”  Fair enough.  When she brings her short stack up next to Sean and Samuel’s tall and near even ones, she proclaims: “I’m screwed!”  And so is Gordon, doused in syrup.  Samuel’s stack for Graham is counted at double Oona’s, but Sean’s stack for Joe beats his too. Graham gets syrup-drenched next, and he eggs on Sean to get Joe too.  Gordon and the kids cheer to do it, and I do too at home.  It’s a great moment when these three are all sticky and chucked pancakes at each other.  Joe eats throughout.  Great sports!  There’s a magic quick change and everyone is less sticky.

As the winner, Sean is exempt from cooking and gets to pick the cream pie that the kids must make.  Joe brings up a chocolate cream pie that I want to eat immediately.  Graham brings up a cherry cream pie under the guise of fruit cream pie and my mouth waters at the thought of banana.  Gordon brings up the last, the citrus creme pie.  Sean selects this for his competitors, as the flavor balance will be hardest to achieve.  He also gets to pick a buddy to join him up in the balcony and skip cooking.  Strategically, Sean selects Mitchell, who is very confident in his citrus cream pie abilities.

The remaining 10 get baking with various levels of enthusiasm.  Natalie, a stand-out from last week, has no sweet tooth and isn’t a fan of making desserts.  Adaiah, who at 12 is one of the most mature and composed cooks in the kitchen, tells, “I come from a long line of Southern bakers,” and clearly has no qualms about the challenge.

Here’s what the kids make: 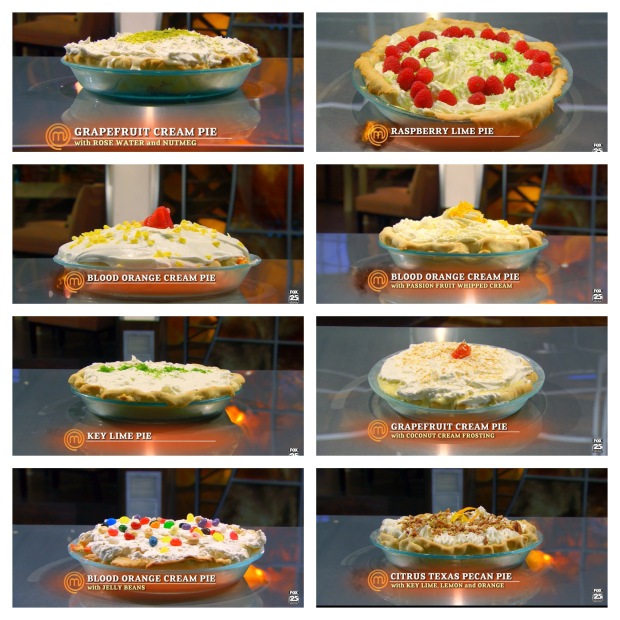 And the big winners:

But of course, the sad part comes when announcing the bottom ranked pies.  Sam, Josh, Jessica, and Natalie are called out for the bottom.  Sam and Josh end up being safe, and Jessica and Natalie go home.

Looking at Natalie’s little face, I teared up.  All of these kids are talented, but I feel like it’s a real shame that Natalie went out so early.  Dessert has defeated many a Top Chef contestant, so I hope she keeps her head held high.

Oona is still my favorite, but I’m so excited to see these kids cook more!  What did you think of the results this week?