I know I said this about Kill the Moon, but Flatline is officially my favorite episode of series 8.  I feel like i’ve been reaching to like this series, but finally this episode completely worked for me.  The Doctor and Clara were in perfect sync, (up until the very end that is,) the monsters were interesting and conceptually scary, and we saw the classic tools of the trade that we love– the sonic screwdriver and psychic paper.  Oh, and we had a lot of fun with a tiny Tardis. 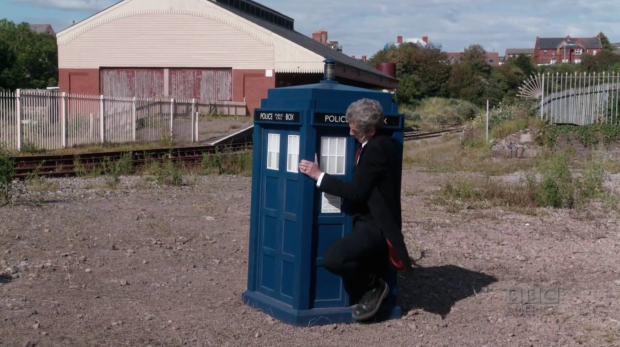 Never has the statement “it’s bigger on the inside” been more true that when the Tardis, landing roughly when/where Clara asked for it to, turned out to be quite a bit smaller than it was before. 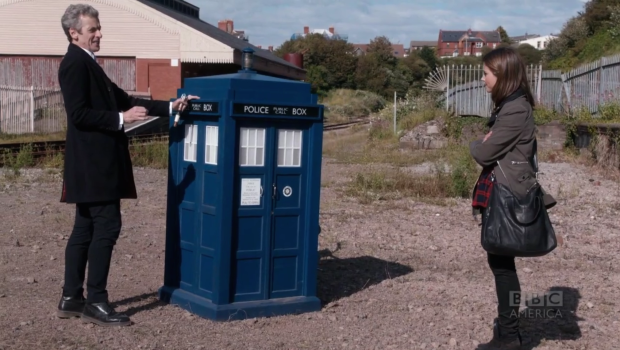 The Doctor is immediately intrigued, but Clara’s a bit frustrated for ending up in Bristol while she’s hiding her travels from boyfriend Danny.  As Clara goes to investigate, the Tardis shrinks even more to a pocketbook-sized portability, which Clara carries around with her throughout the episode.  The Doctor is full-sized inside, and to indicate the new altered size of the Tardis, its interior door looks like something out of Willy Wonka or Alice in Wonderland. 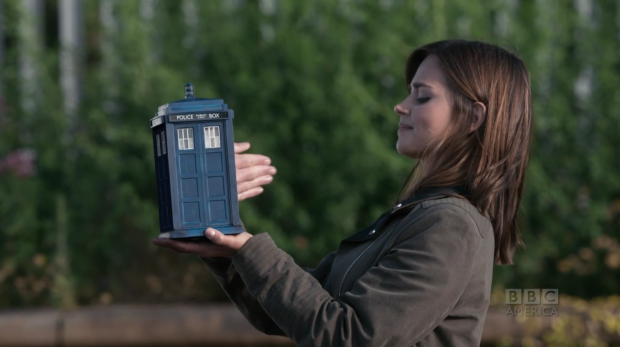 This means Clara gets to play Doctor throughout the episode, poking fun at the vagueness of the title and using her new found moral ambiguity to solve a mystery of missing people.

When an Alex Mack-style puddle sucks up a police office, the Doctor makes the connection that the disappearing people are being turned two-dimensional by the episode’s monsters.  Which is to say, they die.

In concept, monsters living in the walls and the floors and basically any flat surface are absolutely terrifying.  We see this as Clara leads a party of city workers through the underground.  In manifestation, they wear the people they’ve killed like camouflage, which sounds really creepy, but look like claymation zombies.

These monsters suck energy from the Tardis so the Doctor is unable to restore its size and functions.  At one point, the tiny Tardis is knocked out of Clara’s hands and onto the subway tracks.  As a train approaches, Clara suggests the Doctor “Addams Family” it off the tracks, as they only way to move it is manually.  He does, but in his short moment of victory dancing, he knocks it back onto the tracks.  It then goes into siege mode: a silver cube with Gallifreyan markings on it that no one could get into or out of.  Clara comes up with a brilliant plan to restore its power, thinking like the Doctor and using the monters’ power.  When the Tardis is restored and the Doctor finally comes out of the box, the moment feels so earned.

Did you guys love this episode as much as I did?