Padma announces that the first Quickfire is a Sudden Death Quickfire, meaning the loser will face possible elimination.  There are going to be a couple of these this season, she warns.  The first part of the Quickfire is a favorite of mine, the miss en place relay race!  The 16 cheftestants break into 4 teams:

The relay is, of course, New England themed with the tasks being lobster, oysters, mackerel, and little neck clams.  Yum!

Blue team is out in front for the first three events, while yellow lags a bit.  Blue loses its lead at clams, because Katsuji has literally no idea how to open them.  It’s pretty painful to watch.  Ron on yellow makes up a lot of time, Green takes the lead and finishes just before them.  Blue gets their act together and slides into the third spot.  Red is the last to finish, meaning it’s time for part 2: the slowest person on the team is up for elimination.  The slowest is George, who also had trouble with clams.  He is to pick any cheftestant to cook against head-to-head.  If George wins, both stay.  If George loses, he goes home.

George picks Gregory, since he got the mackerel that George really wanted.

They have 20 minutes to cook.  Here’s what they come up with:

Richard calls George’s dish elegant, but in need of heat.  He warns Gregory of trying to do so much, seeing more opportunity to mess up when there are three dishes instead of just one. Gregory ends up winning, sending poor George home very early! I really feel bad for this guy.   Blais said he put his heart on that plate, and mine is breaking for him.

With one cheftestant down, the rest face the Elimination Challenge.  Their challenge is to create an updated version of the first dish they remember cooking– a nod to Boston’s historic nature– for a Top Chef Food Festival at the Museum of Science.  The next day, they get 3 hours to cook for 250 guests.

Here’s what everyone made: 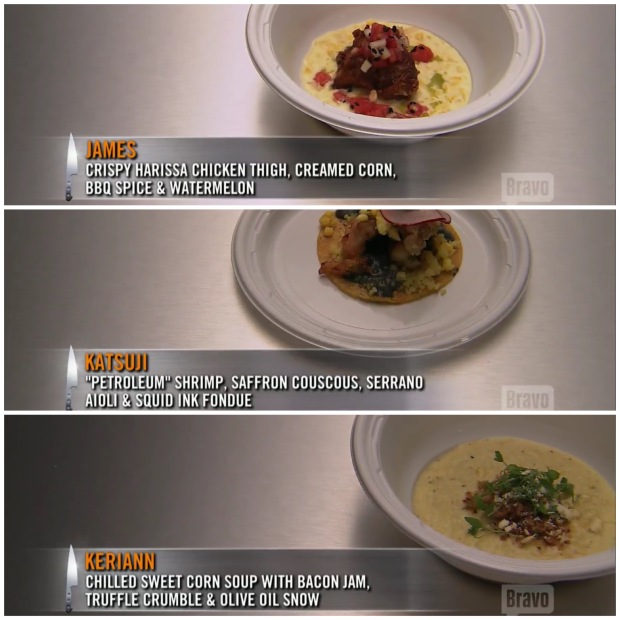 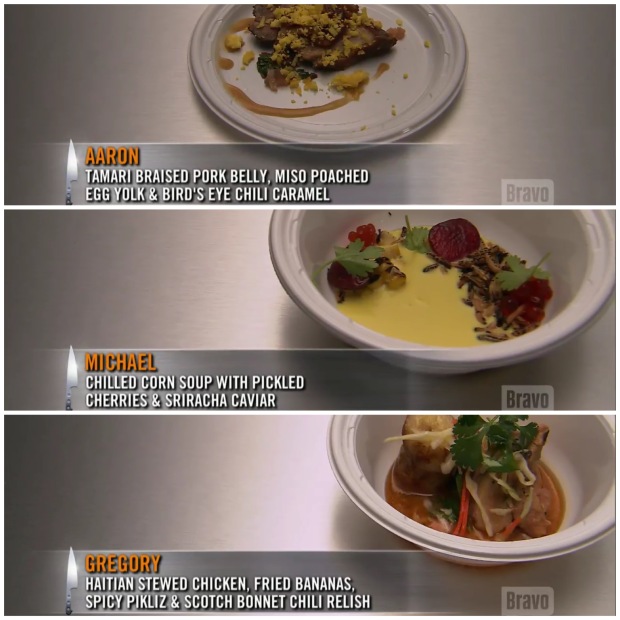 Here’s what the judges think:

In the stew room, Padma announces that they’d like to see all of them.

Gail, Padma, Tom, and Richard sit at the judges’ table. Doug, Mei, and Gregory are called out by Padma—this is clearly the top three. Richard announces the winner: Mei!

Padma then announces it’s time for the bad news: Katie, Michael, and Katsuji are called out. After comments, she announces Michael’s fate: please pack your knives and go.

With two eliminations down in the first episode and a promo of what’s to come—Fenway Park, Plimouth Plantation, cranberry bogs, and George Wendt of my beloved Cheers— I cannot wait to see more! What did you guys think of the Top Chef Boston premiere?

I have my eye on Mei Lin right now, but I’m cheering on my hometown hero Stacy! Any early favorites?