I’ve now watched their original season plus Unfinished Business, and my love for Jet and Cord has reached its peak. I was totally Team Cowboys going into Sunday’s episode.

The teams left Zurich for Seville, Spain. Since last week was a non-elimination leg, the last place team, Jennifer and Caroline, have to complete a Speed Bump along this leg. They seem to actually have a skill set in Spain, one of them having lived there in college and speaking enough Spanish to get around.

Paying homage to The Barber of Seville, (and a song that instantly brings me back to the intro scene of Mrs. Doubtfire,) one teammate had to shave a balloon covered in shaving cream with a straight razor within 60 seconds. If the balloon popped or they could not remove all of the shaving cream within the allotted time, they’d have to start over. A man belted out songs from the aforementioned opera during the Roadblock, just to help improve concentration.

Jennifer & Caroline’s Speed Bump was to deliver six hams to a shop in Seville. While this slowed them down a bit, the Cowboys were having trouble with directions and were slowed down as well…

Detour: Spanish Steps or Running with the Ballz

Both detours were visual joys for me! In Running with the Ballz, teams slide themselves into these adorable, cartoon-y, inflatable bull bumper balls. What happened next was not so adorable…

As “bulls” the teams had to run through alleys looking for posters with the motto, “A matador never thinks about his own death.” While looking for these words, other bumper bulls play human bumper cars at full force. They sent racers flying, rolling, and one (Rachel) whining! It was quite hilarious. The Brenchels, Afghanimals, Cowboys, and Dave & Connor chose this Roadblock.

In Spanish Steps, the teams had to learn and perform a flamenco dance. Jennifer and Caroline chose this, and the Cowboys were U-Turned by the Afghanimals and had to complete it too. 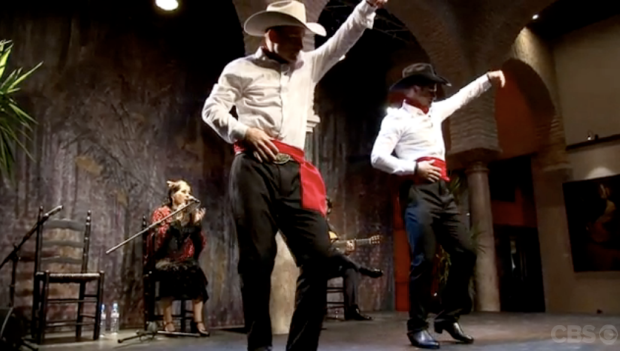 These outfits totally work for them! …who knew this did it for me?

Well, that U-Turn sealed the fate of my beloved Cowboys.   I’m officially bad luck, because I declared my allegiance to Jet & Cord right before the episode in which they were eliminated. I’m so bummed at the results:

I just though that Jet and Cord really deserved the win. They’re the least drama-filled team I’ve ever seen on the race while still being exciting and endearing. “Can I ride your horse?” Cord asks as they make it to the mat in Seville.

This horse was great. It bowed!

I’ll miss these guys a lot for comments like that, and this, their final sound bite:

“Oh my gravy, I’ve been around the world three times!”