As every episode of Orphan Black seems to do, “Governed by Sound Reason and True Religion” gave us a lot of new information and a lot of questions.  I loved this episode even more than the season premiere.  Here are some of the big reveals to keep you up to date with the Clone Club!

Sarah has told Art everything, and he’s committed to helping. After Sarah receives a call from Kira via Felix’s phone, Art tracks the signal to a motel. Art and Sarah go to investigate, but Kira’s gone. Daniel shows up, and Art confronts him which Daniel promises will lead to trouble for him. Sarah, meanwhile, follows a trail of Kira-sized clothing to a garage behind the laundry room. A man clasps his hand over her mouth and tells her to get in the trunk of the car if she wants to see Kira.

Mrs. S is a Total Badass 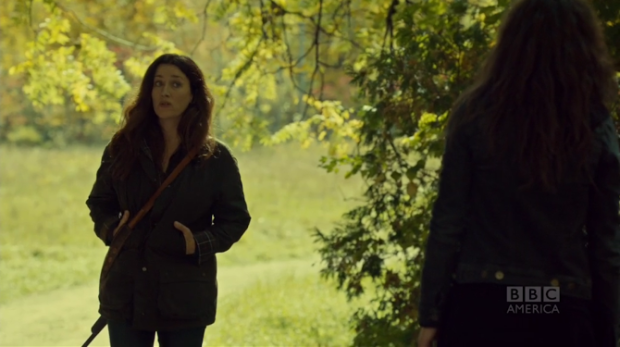 When Sarah is let out of the trunk, she attacks her captor thinking he’s a Prolethean. Mrs. S, strapped with a shotgun, pulls her off of him.

“Yours, love. It’s always been yours.”

Turns out Mrs. S had staged the ransack of her home and she’s brought Kira to the Birdwatchers, who had helped Mrs. S relocate with Sarah and Felix as kids. Mrs. S plans to take Kira to London to keep her safe, leaving Sarah behind. This obviously doesn’t sit well with Sarah, and Kira too is feeling uneasy about the situation. Sarah gets a moment alone with her daughter, and the two decide that they should leave. Barry and Brenda, the Birdwatchers, are supposed to be arranging transport for Mrs. S and Kira, but Mrs. S senses something’s wrong. The sound of an engine turning over alerts them to Sarah and Kira’s attemped escape. Barry runs outside to stop them. Mrs. S prevents Brenda from doing the same by stabbing a fork and knife through her hands, fixing her to the table. Barry has broken the window through on the truck Sarah and Kira are in, and Sarah is doing her best to fend him off. A shotgun blast stops him— it’s Mrs. S to the rescue. She steps aside so Sarah can drive away.

“Who got to you?” she demands of Brenda, still nailed to the table. “I found God,” Brenda says, “and God has deep pockets.” Brenda wants to know what Kira is so special. Mrs. S tells her it’s Project LEDA. Brenda doesn’t know that that means. “Good,” says Mrs. S as she shoots her too.  We know for sure she’s got more information than she’s let on, but I believe Mrs. S is on Sarah’s side. I can’t wait to learn more about Project LEDA.

Cosima has joined the Dyad, claiming she never trusted Sarah. She and Delphine get to work setting up the lab. Rachel comes in and gives Cosima and assignment; she wants her to find out why Sarah is different from the rest of the clones.  I’m eager to learn more about Rachel.  She’s the most mysterious of the clones for now. 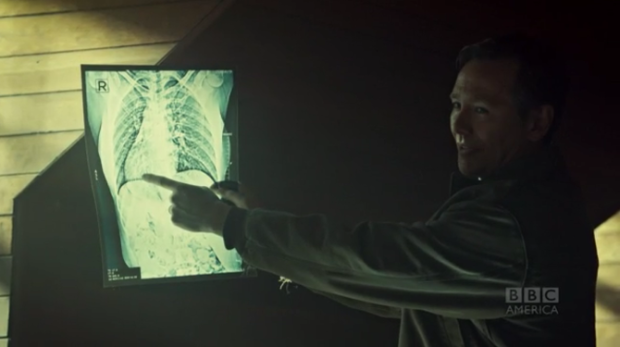 The Prolethean preacher from the diner, Mark, liberates her from the hospital and brings her to this Prolethean farm. Tomas is back by her side, self-mutilating— what is this with religious extremists? The farmer reveals that her anatomy is reversed, organs on the opposite sides, a mirror of her identical twin, Sarah. This is why she survived the gunshot. Mark ends up killing Tomas. It’s clear the Proletheans want Helena in their possession.

There are lots of developments for Alison in this episode. She attends Aynsley’s funeral, and while holding her family’s coats sees suspicious messages on Donnie’s phone including, “she makes her own choices,” and “placate her.” This leads her to rightly believe that Donnie, not Aynsley is her monitor. She confesses to Felix that she watched Aynsley die, while drinking nips of vodka on break from rehearsal of her increasingly odd musical. Felix says they must come up with a plan to test if Donnie is her actual monitor.

“Got any ideas, or just want to keep drinking?”

“I think I need to keep drinking for a while and then I’ll have an idea.”

They do set him up, and Alison does confirm that he’s her monitor. She calls Felix to get her out of her home for a while, but he’s busy going away with Sarah and Kira. I’m worried about Alison!