Today is the birthday of the amazing Amy Sedaris!  If you don’t know who she is, you’re seriously missing out.  This woman is truly something special.  I don’t think anyone on this planet is more her own person than the hilarious Amy Sedaris.

I first read about Amy in the memoir-type short stories of David Sedaris, one of my favorite authors.  He writes of Amy , the pretty sister, wearing half a fat suit to freak out her father, and using voice imitations of the neighbors to make crank calls.  To get the best idea of Amy’s personality, I suggest a Youtube search for her numerous appearances on Letterman.  David Letterman announces her as a talented actress (and she is, as a former Second City Member who starred as Jerri Blank in the Comedy Central series Strangers with Candy, both alongside Stephen Colbert) and a best-selling author– her guide to entertaining, a coffee table book called “I Like You: Hospitality Under the Influence” is an essential part of my personal collection.  In these appearances you may here of her imaginary boyfriend, Ricky.  If this sounds crazy to you, let me assure you she’s not!  She’s weird and wonderful, and completely authentic. 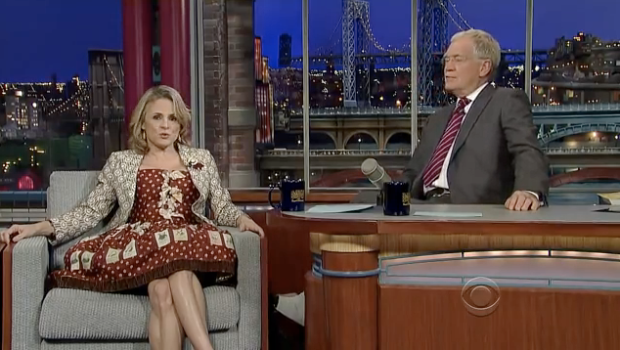 Here she is with David Letterman, wearing a super normal dress with all the US Presidents on it

To celebrate, let’s revisit her television appearances in some of my favorite shows!

In Law & Order: SVU, she played Charlie, the sister of a cyber peeping-tom.

In 30 Rock, she played this crazy visor lady!

Wishing a happy birthday to one of my personal idols, Amy Sedaris!