Ahh, the Girls season finale was great!!  This has seriously been a fantastic season, and this episode was a great note to end on.  For me, this episode has a lot to do with is timing, and at one point or another, each character makes a really poorly timed choice.

It starts with Hannah getting her mail.  Caroline makes a random appearance.  Apparently she’s been living with and dating Laird and they’re going to have a baby.  Weird.  Hannah takes her mail upstairs are literally rips into an envelope, severing its contents.  I do this quite often too, which is one of the many indicators that I’m not quite an adult.  After Hannah tapes the ripped letter back together, she is overcome with enthusiasm.  The letter is an acceptance into graduate school: the Iowa Writer’s Workshop MFA.

Jessa’s new employer, artist Beedie, asks her to help her die.  “Let me get this straight: you hired me so I can get you drugs?” she asks.  Though Jessa is compassionate to her struggle, she refuses.

Hannah tells Marnie, then her parents about the acceptance letter.  Her parents tell her to go for it– seize the opportunity now and figure out the rest later.  Marnie is thrilled for Hannah as well, but has a problem of her own to deal with now that the secret’s out about her and Ray.

Shoshanna goes to pick up her robe for graduation and is met with some unpleasant news: she is 3 credits short due to failing a sociology class.  Returning home, she trashes her apartment in anger.  This is when Marnie comes in to break the news to her.  “Is this an okay time?” she asks, seeing the wreckage.  Even though Shosh claims it is, and Marnie is able to calm her down about the school situation, the answer is really no, it was not the right time to tell her.  Marnie chooses to anyway.  Shoshanna reacts by tackling Marnie, pinning her down, and yelling, “I hate you!”

It’s opening night of Adam’s play.  Hannah, Marnie, Shoshanna, Ray, and Elijah are all here to cheer him on.  Shosh sees Ray and, fire burning in her eyes, lets him know that they are having a chat at intermission.  Hannah goes to see Adam in his dressing room before the show to wish him luck, tell him she’s proud of him, and announce that she got into graduate school in Iowa.  Was this the worst time to tell him that or what?  Marnie makes an equally bad choice of going to see Desi in his dressing room before the show.  She gives him a present, James Taylor’s pick, and they kiss.  Then they really kiss.  Marnie, giddy, comes out and tells everyone that Desi kissed her… even though it was definitely mutual.  “I can’t see this ending well for you,” says Elijah.  Hannah feels the same way, citing Desi’s girlfriend, Clementine.

At intermission, Shosh’s fire is gone.  She looks at Ray with such sadness, such sincere emotion, that I think this is Shoshanna’s best moment in the series.  She can’t bring herself to yell at him, so he starts.  He apologizes, and defends himself because Shosh broke up with him.  “I want you back,” Shosh blurts, tears in her eyes.  Clearly her year of freedom didn’t work out academically, and emotionally either.  She tells Ray she made a mistake and he makes her a better person.  Ray says he is grateful to Shoshanna for the way she pushed him to become a better person– he has a real job, a credenza, a cactus– but they are in different places in their lives.  “Please,” she breathes, tears welling, “Please?”  Ray stars, “It’s not a matter of–” and again Shoshanna sighs, “Please…” just as intermission ends. 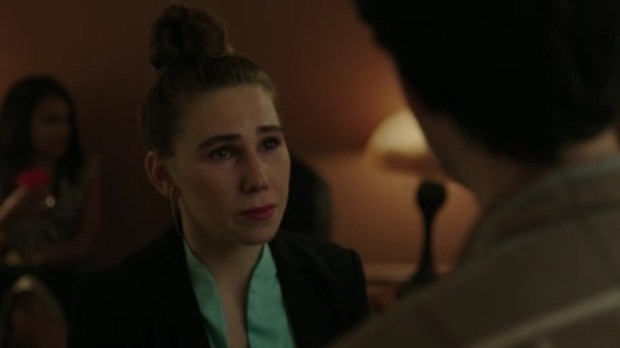 Adam’s part is in the second act, and Elijah wakes a sleeping Hannah to see.  She is deliriously happy to see him up there, and at the end she and Marnie clap and smile with pride.

Jessa has apparently decided to help Beedie.  She feeds her pills, holds her hands, and sits by her bedside.

After the play, Marnie is surprised to see Clementine in the bathroom.  The tension is palpable, and Clementine, knowingly, tears her apart.

Elijah and Hannah wait for Adam by the actors’ door.  When he comes out, he is furious with his performance.  Though everyone thought he was great, he thinks he was terrible and blames Hannah’s delivery of the Iowa news. Elijah leaves quickly, sensing the tension.  The most articulate Adam we’ve ever seen asks her what now.  “I’m sick of trying to work it out.  Can’t one thing ever be easy with you?” he says.  “Congratulations on a beautiful opening night,” Hannah says cooly, and walks away.

Shosh picks up the mess in her apartment calmly.   Picking up a textbook, she hurls it in anger.

Marnie hides, witnessing Clementine and Desi fighting over their relationship rather publically.

While taking publicity pictures, a castmate cozies up to Adam and plants a big kiss on his cheek.

Hannah comes home, picks up her acceptance letter, and smiles.