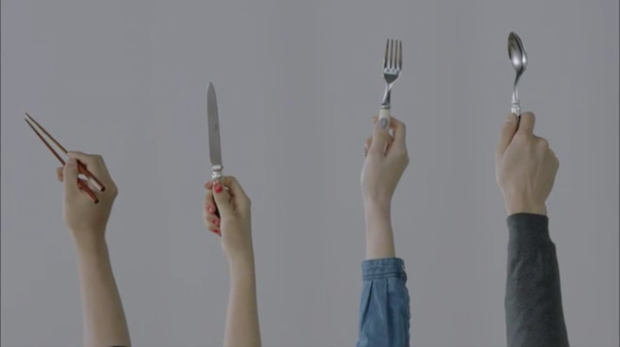 Korean dramas are super popular right now.  I can’t pinpoint the population with which they are popular… probably people like me that watch foreign language television?  Anyway, I’ve been hearing a lot about Korean shows and the title of this one enticed me to give it a try.  Well, the title and the teaser: what do four foodies and a murder have in common?

Let me just say, I’m absolutely loving Let’s Eat!  I identify with the main character so much.  The constant food imagery, the way they paint the lifestyle of a single woman living alone, and the hints of the murder mystery makes this basically the perfect show for me.

Lee Soo Kyung is a 33-year-old divorced woman living alone.  Everyone makes a huge deal about this.  Soo Kyung doesn’t let the pressure to get remarried bother her and manages to live a very pleasant life privately.  She likes to watch “American dramas” like The Walking Dead, and mainly keeps the company of her dog, whose name is Che Guevara (“Bara” for short). What Soo Kyung really loves is eating.  Every episode has a sequence of Soo Kyung eating indulgently, almost orgasmically.  Eating delicious food is truly her passion.

Soo Kyung is perfectly capable of doing things by herself, but struggles with eating alone.  I feel this struggle.  Restaurants alone are hard, and some portions are simply too much for one person.  Soo Kyung prefers to be alone, but when a dinner offer is made she just can’t resist.  She is obsessed with a food blog and works at a small law firm as the chief secretary.  The series starts with Soo Kyung coming home to learn her next door neighbor, another woman living alone, has died after choking on her dinner.

Koo Dae Young, Soo Kyung’s sketchy neighbor is a definite foodie as well.  His apartment is barely furnished and he sleeps on the floor with a blanket and pillow.  Soo Kyung doesn’t trust him and calls him a con artist type.  He knows a lot of information about people, but is generally good-natured.  He is later revealed to be an insurance agent, but there’s still something a little off about him.  I have a hunch that he’s the food blogger Soo Kyung is so into.  When it comes time to eat, Dae Young always instructs on the best way to enjoy what’s about to be consumed.  This usually leads to someone saying something like, “but all pizza is the same!”  Dae Young will then launch into and elegant diatribe about the food at hand.  He is admired by Soo Kyung’s spinster coworker, Attorney Oh, as well as Jin Yi.

Yoon Jin Yi is a young, student-aged girl who moves into the apartment the woman had died in.  Jin Yi comes from a rich family, but is temporarily on her own making ends meet.  Her father has gone to prison (I don’t remember why, but it’s not a violent crime, something white collar) and her mother, in shock, has moved to America with her brother, Jin Yi’s uncle, to get through the difficult time.  Jin Yi is a very optimistic girl who doesn’t feel the gravity of her situation.  She is very naive about finances, having never had to think about supporting herself before.  She befriends Dae Young and Soo Kyung and really brings them together as a group.  She also receives advice from Soo Kyung’s friend Kyung Mi.

Kim Hak Moon is the lawyer and owner of the law firm for which Soo Kyung works. It is revealed that they are alumni of the same college.  While Soo Kyung doesn’t remember Hak Moon, he had a huge crush on her because she was beautiful and sought-after.  Lawyer Kim, as he’s called by his staff, on the other hand, was a total nerd in school so Soo Kyung never noticed him.  He hired her and seems to be working on some kind of revenge now that he’s successful and sexy.  (I’m totally into Lawyer Kim.)  He seems to derive genuine enjoyment from watching Soo Kyung eat, and can get a little flustered because of how sexual it can seem.

I’m on my fifth episode and the “foodie club” has just been formed.  Right now, it’s just Soo Kyung, Dae Young, and Jin Yi.  Lawyer Kim has not met Jin Yi, but it seems that he is the fourth member of this group.

From what I can tell (because I don’t speak Korean), there are 16 episodes so far of Let’s Eat.  Twelve of them are available on Viki.com and the English translations have been great!  I 100% recommend checking out this show!