After the big blowout at the beach house, I was anticipating a little bit of fallout.  But wait, did I miss something?  The girls don’t seem to be mad or bitter.  No lingering hurt feelings have come up.  Yet.

Adam wins a role on Broadway in the revival of Major Barbara.  At the time Hannah gets the good news, she happens to be interviewing Patti Lupone (!!) who sends her words of caution.  She warns that Adam will be living and breathing this play and his fellow cast mates.  Considering this is Hannah, I don’t feel that her reactions were too over the top.  What I do feel is over the top, is Hannah’s paycheck! 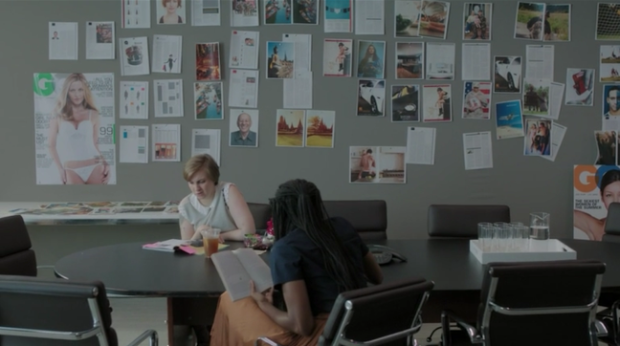 She’s still at GQ doing advertorials, but when she gets her first paycheck, she remarks that it is way more than her rent.  She’d better not mean that one paycheck is way more than her monthly New York rent.  I’m insulted by the prospect of Hannah making more money than I do.  Her next advertorial assignment lands her a room at the Gramercy, where she plans a celebratory get-together on Adam’s behalf.

Things are not going well with Marnie.  She runs into a friend who is starting her own art gallery, then off to Ray’s.  I can’t figure out what Marnie wants from this relationship, but Ray wants a real girlfriend.  Marnie is clearly not willing to admit they hang out, let alone get in a relationship with him.  He dumps her.  Marnie pretends she doesn’t care, then cries in the bathroom of the Gramercy.

Things are finally getting interesting with Jessa!  She is bored to tears with her wholesome children’s boutique job.  Jasper from rehab swoops in, having shown up at Jessa’s address first.  (Shosh asked him if he was there to rape her.)  He is a toxic influence on Jessa, who arrives at the Gramercy with him and completely high on coke.  No one makes too much of a fuss about Jessa’s relapse.  Hannah simply states that maybe she wasn’t ready to leave rehab.  Yeah, that’s pretty clear.

Adam has brought his new friend and fellow castmate Desi to his celebrations.  Hannah hates him, but Elijah and Shosh love him, recognizing him from One Tree Hill.  When Hannah comes out of the bathroom with Marnie, post-consoling, Desi is playing Bob Dylan on guitar.  In a moment I’ve wanted to live my whole life, but never could because of my completely lack of ability to sing, Marnie joins in harmonizing.  Hannah hates this too.  Elijah joins in.

There’s an absolutely hilarious moment with Jasper and Shoshanna, buzzing in conversation.  “But you’re clearly on coke,” he says to her.  No, this is just how fast Shosh talks.  Then there’s a noooo moment, when Jessa breaks into her place of employment to steal some money for more coke.

What do you guys think?